Christmas is a time to gather with family, friends and others who have touched our lives deeply. My sincere sympathy to all who are grieving this season.

Judy Mikovits, Ph.D., is a scientist and researcher who’s been very vocal about the COVID-19 pandemic, the virus’ origins, the proposed “vaccines,” and the side effects that people are reporting from the COVID jabs.

In early December 2021, she lost her husband, David Robert Nolde, unexpectedly. In a loving video tribute to him, Mikovits details how he died. Much like King David, her David was “a man after God’s own heart,” Mikovits says. He had a pedigree of kindness, with a childlike faith and a goal of bringing joy to the world, even when joy seemed impossible, she says.

David had suffered from COPD for four decades, but his condition worsened after he was denied access to essential medications and he had to check in to the local hospital. When the hospital learned he hadn’t gotten the COVID shot, the staff assumed he had COVID, and were planning to treat him as a COVID patient.

“By a miracle of God I was able to get into that hospital just in time,” Mikovits says, as they were planning to deliver what she says would have been a deadly treatment of remdesivir and intubation.

He was nearing death when she arrived, but within 24 hours after she intervened, he was doing better.

Everyone was joyful for his recovery.

The miracle of a man on his death bed literally coming alive, immediately getting better and being the very soul of a “God wins” moment is the memory Mikovits says she wants everyone to hear. “It was always my David’s greatest desire to run the race for his Lord and savior, to finish well, and to hear these affirming words, ‘Well done my good and faithful servant,’” she says.

Instead, he died when his heart gave out — Mikovits states “the hospital staff had neglected to give him his blood pressure medication.”

David Robert Nolde, 83, of Ventura died at St. John’s Hospital from a heart attack and chronic obstructive pulmonary disease (COPD) which he’d acquired as a young man from a bacterial pneumonia. Nolde was born in New York to German immigrant parents, Charles and Elfrieda Nolde, on July 26, 1938, and grew up in Norristown, Pennsylvania, and Absecon, New Jersey, with his sister, Elizabeth, who predeceased him on October 13, 2002. 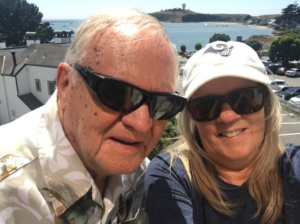 David had a lifelong love of boating and the sea. He treasured opportunities for activities that allowed him to enjoy the majestic beauty of the ocean, particularly sharing these times with his five children and eight grandchildren. He was looking forward to doing so with his four great-grandchildren. His love of history and the sea led him to military service. After earning an associates degree in 1958 at George Washington University and a bachelors degree two years later from the University of Miami, he was commissioned as a lieutenant in the United States Coast Guard. David served in Puerto Rico during the Vietnam War.

After serving, he began his career at General Electric in Philadelphia, then moved his family to Ventura in 1976 and began a career working for Ventura County Health Care as an administrator in the personnel department. Throughout his life, he found fulfilling joy in actively living out his faith in Jesus Christ by loving others in action, word and deed, first to his children and grandchildren.

When he retired in 1999, his prayer for God to lead him to a wife to serve in his next phase of life was answered when, shortly after his retirement, he met the love of his life, his wife Dr. Judy Mikovits, a research scientist at the National Cancer Institute. They married October 7, 2000, and David enjoyed traveling with his bride to many world destinations where she delivered lectures of scientific research studies. Treasured memories were trips to his parents’ homeland of Rugen, Germany, in 2003, and Christmas markets with their dear friend Regina who reunited him with his beloved cousin Marguerite (Grete) Hartmann in 2014.

David will be missed by his family and all who knew the light of his smile and the love of his heart. His attitude in life was contagiously joyful, touching both those who were close to him and strangers he met out and about. His mother called him “Sunshine Boy” when he was young, and he carried that childlike radiance through his entire life. He had a gift for listening and understanding people, and a knack for befriending just about anyone. His family reflects that there “simply is no kinder human,” and he was described as like a “Teddy Bear” in his warmth and friendliness. His wife cherishes sweet memories of music and laughter with him. She is especially thankful for the many times he would text songs that were meaningful to her, like “Calling All Angels” by Train during difficult times — a reminder of his constant support.

A lover of the ocean. A man of steadfast joy and prayer. A selfless husband. A devoted father and grandfather. David Nolde, a true example of light and love. Memorial services will be held at 12 noon on January 7, 2022, at Godspeak Calvary Chapel, 320 Via Las Brisas, Newbury Park, with the Rev. Rob McCoy officiating. Memorial contributions may be made to ChildrensHealthdefense.org and Caregivers of Ventura County.