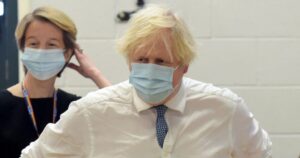 Experts have expressed outrage towards the Government for not revealing key details relating to the U.K.’s first Omicron death, with Professor Karol Sikora saying that the Government’s secrecy is likely causing unnecessary panic. So far, the Government has not provided information on whether the deceased was vaccinated, if they belonged to a vulnerable demographic, or even if Covid was the leading cause of death, with the Prime Minister’s Spokesman stating rules surrounding patient confidentiality as the reason for this lack of transparency. MailOnline has the story.

Experts are demanding answers about the U.K.’s first Omicron fatality, such as the individual’s vaccination status, if they were part of group vulnerable to Covid, and if the virus was the leading cause of death.

Professor of Medicine and Consultant Oncologist Karol Sikora said the Government was not providing the nation with enough information about the death, and that this was causing “unnecessarily alarm”.

“Were they in hospital for Covid or were they there because they had been run over by a bus?,” he said.

Boris Johnson revealed the U.K.’s first death due to Omicron on a visit to a vaccination clinic in Paddington, west London.

He said: “Sadly yes Omicron is producing hospitalisations and sadly at least one patient has been confirmed to have died with Omicron.”

Johnson did not reveal the age of the person who died, or if they had underlying health conditions, which made them vulnerable, or whether Omicron was the leading cause of their death or a secondary factor.

The death in the U.K. is thought to be the first confirmed Omicron fatality in the world.

However, given the variant makes up almost every case in South Africa it is likely that the vast majority of fatalities there are due to the mutant strain but a lack of testing means these are not picked up.

Health bosses today also revealed that 10 Britons have already been hospitalised with Omicron. But the U.K. Health Security Agency (UKHSA), which confirmed all were aged between 18-85 years-old and that most had received two doses of Covid vaccines, refused to say if any had already had a booster.

UKHSA however did reveal that the individual who died of Omicron was diagnosed in hospital.

Sikora said the Government should release more details about the death to put people’s minds at ease.

“Have they had booster? Are they elderly?,” he said.

“There are all sorts of nuances to this thing, and we’re not being given proper information.”

He added that given the average age of Covid fatalities in the U.K., and that the individual may have died while being infected with Omicron, as opposed to because of the variant, there was no reason to panic and the Government should calm fears rather than stoke them.

“No details have been released, I suspect it’s just some old boy that’s tested positive, he may have died in his sleep or with a heart attack, who knows?

“It is unnecessarily alarming.”

Professor Sikora said his suspicion is that the silence regarding whether the person was vaccinated or not indicated to him that the person died of another cause while they had Omicron.

“I suspect that it’s a death, which is unfortunate, but is due to something else, and it just happens to be Covid positive that’s why they’re not making a big noise about them being vaccinated or not,” he said.

When queried on the lack of details regarding the Omicron death, the Prime Minister’s Spokesman cited patient confidentiality as a reason, but added more details may be forthcoming in UKHSA end of week report.

“Obviously when it comes to individual deaths there is a right to patient confidentiality so we are limited in what we can say,” he said.