Leaked videos and year-old rumours are already undermining the new restrictions. But why? 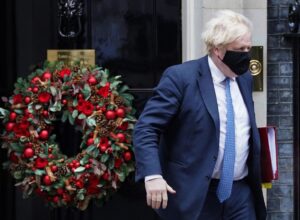 Less than two hours ago, Prime Minister Boris Johnson announced that the UK was going into “Plan B”, meaning stricter lockdown measures over the Christmas period, supposedly in order to combat the spread of the terrifying new Omicron variant.

The new public health orders include some of our old favourites like working from home and mask mandates, as well as requirements for venues to use NHS QR codes to check everyone’s vaccination status.

This was inevitable the moment we were told Plan B even existed. As a general rule, when the government tells you there is Plan B, there is no Plan A.

But the announcement of a semi-lockdown this Christmas is already overshadowed by a party that (allegedly) happened last Christmas.

Over the last two days the news has been filled with rumours and leaked videos alleging that, last Christmas, while the country was still in lockdown, Number 10 hosted a Christmas party.

There has been no official admission that the party happened at all, but the Prime Minister’s former Communications Secretary Allegra Stratton has Resigned her post as COP26 spokeswoman following a video leaking that shows her joking about the party.

Did the party happen? Who knows at this point.

If it did it’s just another example of the elite showing they don’t really believe their own hype, and the fear they try to spread is fake as all hell. But we’ve been saying that since last spring, it’s not really news.

What’s interesting is the timing.

The press attempts to conjure mystique around “the news”, as if it’s an organic process that no one really understands, but it’s not. It’s just people saying things, or printing things, or uploading things.

If there are rumours about a Christmas party now, you better believe the same rumours existed when it happened. Hell, if there was a party there were probably journalists there. If a video can “appear” now, or suddenly “be released” or get “leaked”, it could have been leaked any time.

To paraphrase a quote, you should always ask “Why this? Why now?”

Myriad potential explanations exist, but the two most interesting that occur to us are:

Either way, there’s very much the feeling that the party scandal is just a ripple on the water, indicating some more frenzied activity well beneath the surface.

It could be that – in the UK at least – the Great Reset agenda is not monolithic, and maybe there is some bureaucratic resistance to the tyrannical laws being put in place.

Of course, you can never completely rule out that things are done simply to sow confusion or chaos, or it could just be an example of the positioning and backstabbing that are endemic to all political elites.

But what do you think?

DISCUSS: UK announces “Plan B” in the shadow of the party that never happened.

4 Responses to “DISCUSS: UK announces “Plan B” in the shadow of the party that never happened.”