He exposed both the financial corruption in the Vatican in 2012 and in 2018 accused Pope Francis and other Church leaders of covering up sexual abuse allegations. He is now branded a conspiracy theorist due to his stance against the ‘New World Order’ and ‘The Great Reset’.

In November, Archbishop Viganò called on people of faith to unite in a worldwide globalist alliance to free humanity from the totalitarian regime. He called on this alliance to ‘denounce the crimes of the elite’.

He argues that we are ‘witnessing a global coup d’état in which a financial and ideological elite has succeeded in seizing control of national governments, public and private institutions’. He believes it is the plan of this New World Order to create a universal republic which enslaves every human being.

So far, so classic conspiracy theory. Easily dismissed. Or so we might think. What we can say, I think with impunity, is that the billionaire class exists and has a vastly disproportionate influence on nearly every aspect of our lives.

Hard to call that conspiracy theory; much fantastic investigative journalism has been done in these pages to bring that to light. See the work of my friend, the brilliant Karen Harradine.

On the one hand you have the billionaire class (the elite to which Viganò refers), with its unimaginable wealth; the pharmaceutical companies with a deep history of malfeasance; plus our political and scientific elites whose credibility appears to be evaporating before our eyes. All back to 10 Downing Street for a party, anyone?

On the other hand you have an archbishop, a man of God with a history of exposing deep corruption within the Church who is speaking out, he believes, on behalf of humanity.

It is very interesting to observe who is more deserving of faith – not a man who lives by the words of Jesus, but men and women who live by no word at all. Does that feel odd to anyone else? How have we ended up worshipping the billionaire class, blindly following a corrupt political class and denigrating a man of God?

Why? Because we simply have too much information to reason the decision. We’re not going to read all the scientific papers, we’re incapable of processing all the data, we’re literally overwhelmed with conflicting reports, papers and opinions. A deluge of propaganda from compromised sources.

Any decision must be made outside of reason. The direction we take, we take on faith. Faith in our new leaders, or faith in our old religions and our previous beliefs.

It might be worth addressing what the new two sides in this battle for our souls require from us. The old religion and the new religion.

The new religion: The billionaire class would have us believe that they can control the universe from the top down. The solution to every problem is global, more centralisation. Their dogma is something called ‘the science’.

In order to achieve this ultimate command and control, this completely predictable technocratic world, what do they require from us? What are the tenets of the new faith? My list goes something like this:

Commit child abuse on an industrial scale with the imposition of unnecessary ‘vaccines’ and pointless masking; Compromise the mental health of children and young adults via poorly-constructed, inconsistent and ineffectual policies, including lockdowns and school closures.

Facilitate the greatest wealth transfer in history from everyone else to the billionaire class; Participate in the corruption of the Fourth Estate; Create the most severe late diagnosis and missed treatment crisis of all time; Destroy the SME (small and medium enterprise) economy, transferring business activity to faceless multinationals.

Acquiesce in constant and permanent monitoring of your activities and transactions; Require the presentation of papers to conduct your life; Relinquish the right to assemble freely, to protest; Live outside to in, rather than inside to out.

Lose anonymity and privacy; Move from a serendipitous life to a planned life; Exchange nature for the machine;Move from free will to submission.

These are the creeds of a new religion. A religion where Man replaces God. Where hubris replaces humility. A godless faith.

There is no doubt that Viganò sits outside the Overton Window of acceptable debate. Be it stained glass or not. But what were the tenets of your faith? What did you believe in before the false god of biosecurity appeared?

Please make a list of what you believe and compare with the tenets of the new religion above. How does it compare? How does this imposition of a new reality make you feel?

It feels to me like a brutal rejection of everything we held important. Everything that facilitated the potential for a fulfilling life on this beautiful, if occasionally unforgiving, planet. A violent imposition of a ‘new’ and fearful reality.

What did the old religions require from us? What does your religion ask of you? What characterised your personal relationship with God? Compare that to your relationship with this new religion. How does it feel to be told how to live, what to think? What does Vigano ask of us? Love and forgiveness? Free will? Humility? Repentance? Crazy talk.

Pause for just a moment to think about the kind of world this new religion will deliver. This glass-bound twin of reflection, this hall of mirrors, contains only wonders of algorithm. It cares nothing of love, warmth or life. It makes all calculations based on ‘the science’.

It breeds ideas of exchange and distraction, it covets order, it imposes control. It creates two classes of people: Those who own nothing, and those who own everything. That sounds a lot like slavery to me.

Do you want your future, your children’s future, defined by a group of people who have accumulated so much wealth and power as to move beyond any recognisable morality? Do you cede your God-given rights of self-determination to a tiny minority of sociopaths?

Is that the direction you want to go?  Because there will be a price. There’s always a price. These false idols owe Charon to unmeasurable forces that do not fit inside knowledge. The ferryman always wants paying. The unimaginable future always thwarts the vanity of man.

What is it that lives beyond the sure gaze of ‘scientists’ and waits before God for payment? What is the price? Are you prepared to wager your immortal soul?

You are at the crossroads. Do you submit to control, or determine your own destiny? Live in perpetual fear or glorious freedom? Accept the brutal imposition of a new reality, or stand together to protect this beautiful mess, this teeming mass of possibility, from which all hope, all that matters, springs?

It’s time to pick a side. 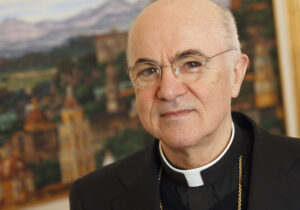 Italian Archbishop Carlo Maria Vigano, former apostolic nuncio to the United States, is pictured at his residence at the Vatican in this Oct. 20, 2011, file photo. German bishops have rejected COVID-19 “conspiracy theories” by Archbishop Vigano and Cardinal Gerhard Muller, former prefect of the Congregation for the Doctrine of the Faith. (CNS photo/Paul Haring) See COVID-GERMANY-REJECT-CONSPIRACY May 11, 2020.