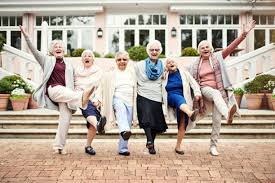 Your government wants you dead. If you’re over 60 then the bean-counters think of you as a burden. They don’t want you alive because you’ll cost money. So stay alive as long as possible. And piss off the moody, miserable, selfish politicians by letting them see that you are enjoying life.

Retain your freedom, dignity, independence, self-development and sense of humour.

Stay young in spirit, start again at 65 and live another life for free.

1. Beware of the NHS. It is official Government policy to ignore the needs of the elderly. It has, for some years, been perfectly legal for doctors and nurses to murder anyone who can be described as `elderly’ and therefore regarded as an expensive and troublesome burden. Doctors and nurses work for the Government and are told to let old people die – and to withhold treatment which might save their lives.

2. Bloody mindedness may not be a popular quality and it may not win you friends among life’s prefects but it is, generally speaking, more of a virtue rather than a curse. ‘Do not go gently into that good night’ wrote Dylan Thomas in a remarkable moment of comparative sobriety. The bloody minded live longer – especially if they are marooned in one of those appalling places we call hospitals. Complain a good deal and ask as many questions as you can. Make a fuss and remind everyone in a uniform or a white coat that you are a human being. Be forever aware of your dignity and your self-respect. Influencing people to regard you with more respect will mean that you will be treated better.

3. Don’t let people patronise you. You’re on the telephone talking to some kid and he insists that before we go any further he must know your birth date. This is a modest nod in the direction of security. You tell him your birth date. `That’s brilliant’, says the patronising kid when you get your date of birth right. `Wonderful!’ he says when you get your postcode right. Patronising little bastard. If advertisers want to poke fun at someone then the first choice will be an elderly, white, heterosexual male. No advertiser would ever dare take the mickey out of a Muslim, a gay or a Jew. On chat and game shows, hosts and interviewers always lower their voices when they talk to anyone with one or two grey hairs. ‘And how old are you?’ they ask. If the guest turns out to be over 60 the host will lead the live audience in a round of applause. Patronising bastards. I also get pissed off by colleges which run special courses for the elderly. Can you imagine the outcry if painting or computer classes were organised for black people?

4. Between a fifth and a quarter of the population is now over the age of 65. But we haven’t yet reached what I call `Peak Pensioner’. The good thing is that the more of us there are, the more clout we have. If we stick together we can control the country. Here is to Pensioner Power!

5. There are some perks in being old. Cancer tends to grow more slowly than it does in younger people so that’s something definitely worth looking forward to. The big, nasty utility companies aren’t supposed to cut you off. And if you do get sent to prison for not paying the damned TV licence, you’re far less likely to be gang raped or beaten up. No 70-year-old is going to be someone’s bitch. Beating up a 70-year-old isn’t going to enhance the reputation of the prison hard man.

6. Ageism is the acceptable face of prejudice, bigotry and discrimination. People who would not dream of expressing prejudice towards people of another colour or race will quite happily express outrageously prejudiced views about the elderly. And the desperately and determinedly politically correct will discriminate against the elderly without a second thought. Sexism and racism are rightly outlawed but ageism is now a State sponsored prejudice. Individuals who sneer at the elderly are the same people who used to sneer at blacks, women, invalids, homosexuals and Jews. Tell anyone guilty of ageism that they are a prejudiced bigot.

7. If you live in an old folks home of any kind remember that staff working in nursing homes are allowed to medicate the inmates against their will and without their knowledge; doping them with tranquillisers and sedatives in order to make them less troublesome to care for. Spit the damned tranquilliser or sleeping pills out if you don’t want them or need them.

8. Traditionally the elderly were regarded as repositories of wisdom, knowledge and experience. Today, the elderly are assumed by hubristic millennials to be out of touch and stupid. Take every opportunity to expose their ignorance. It’s been suggested that over 65s should not be allowed to vote. Point out that over 65s are more experienced and should each have two votes.

9. It is regularly suggested that euthanasia for the over 65s should be made widely available. Remind younger folk that if they are lucky then they too will be 65 one day and members of the oppressed minority. Point out that if involuntary euthanasia is brought in it won’t be long before the recommended age will fall. 10. Carry a stout stick. I recommend carrying a stick even if you don’t need it for support. Sticks are good for waving at people who have annoyed or patronised you. 11. Stay physically active. Instead of paying a bunch of Romanians to wash your car, buy a sponge and a bucket and do it yourself. A group of 70-year-old men who joined a one year exercise programme ended up with the bodily reactions of 40-year-old men.

12. Remember that doctors often make mistakes. If a doctor tells you that you’ve got a nasty illness, insist on a second opinion. Watch out for ageist doctors. Remember the old man who went to see a doctor complaining of a pain in his left shoulder. ‘What do you expect, at your age?’ demanded the doctor gruffly. ‘My other shoulder is the same age, and that doesn’t hurt,’ replied the old man.

13. Don’t let anyone tell you how long you’ve got to live. Over a quarter of a century ago I was told I had kidney cancer and had six months to live. The silly bugger who told me that is dead now.

14. Keep out of hospital. I’ve heard of hospitals where the staff deliberately put the elderly patients onto the wards where deadly bugs are endemic. If you do need to be in hospital equip yourself with plenty of antiseptic wipes because most hospitals are disgustingly dirty. If possible, have decent food brought in because the stuff they serve up in hospitals tastes like crap, looks like crap and probably does you as much good as crap.

15. Be sceptical of vaccines. The flu vaccine doesn’t work well with older folk but GPs try hard to flog it because they make a fortune out of vaccinating old folk. And be wary of other vaccines too. The live shingles vaccine is very popular at the moment. It costs the NHS about £55 a pop and the list of side effects would scare the living daylights out of you. One of the most worrying side effects is something called `death’.

16. Most people over 65 will need reading glasses though the ones that suited you at 60 will probably do for a few years so don’t get tricked into buying expensive new spectacles every year. I once visited an optician and was told I had macular degeneration and needed some expensive pills which they could sell me. I didn’t have macular degeneration and didn’t need their damned pills. On another occasion I had my eyes tested by a 14-year-old who found that my visual fields were appallingly restricted. This seemed odd. I wiped the screen with a paper tissue and asked him to repeat the test. I was fine.

17. Between a quarter and a half of all operations are unnecessary. Most heart surgery is unnecessary. If you see a surgeon he will probably recommend surgery – in the same way that if you go to a Ford garage they’ll recommend that you buy a Ford.

18. The world is full of cowards who target older people because they are seen as vulnerable and easy prey. Never open your door to anyone you aren’t expecting. (When did you last open the door to an unexpected caller and have a pleasant surprise?) The person at the door will either be someone from the council to tell you that you haven’t been ironing your yoghurt cartons properly or a bastard wanting to repair your perfectly serviceable driveway.

19. If you have poor health and must travel somewhere by train or aeroplane tell everyone with whom you come into contact that you are frail and need help. Insist on being met with wheelchairs. Have a hissy fit if they forget. The words `formal complaint’ are like hand grenades. If all else fails just collapse on the floor. This should bring useful attention.

Adapted from The Kick Ass A-Z for Over 60s by Vernon Coleman, available as a paperback and an eBook.

Note: Vernon Coleman is a doctor and Sunday Times bestselling author. He has written over 100 books which have sold over two million copies in the UK and been translated into 25 languages. His books include `Mrs Caldicot’s Cabbage War’, which has been turned into an award winning movie, and The Young Country Doctor series of 15 books which describe the life of a doctor who isn’t very old and who works in the country.