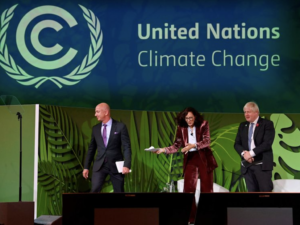 We’re publishing a guest post today by journalist Chris Morrison about the 1.5°C target, the climate change models and the way in which ambitious politicians, self-described ‘scientists’ and rent-seeking industrialists have leapt on the bandwagon to end all bandwagons.

Politics, not science, lies behind the drive to keep global temperatures to 1.5°C. Not the thoughts of your correspondent, but the clear implication of words spoken in 2010 by the so-called father of 2°C, an earlier IPCC target, Hans Joachim Schellnhuber. Interviewed by the Der Speigel, Mr Schellnhuber, the IPCC lead author and at the time Angela Merkel’s Climate Adviser, was asked why he had imposed the “magical limit” to which all countries must slavishly adhere. He said: “Politicians like to have clear targets and a simple number is easier to handle.”

Of course, the push to net zero and the ‘settled’ science that is claimed to support the move is political. It is in fact the great political debate of the age, which makes it surprising to see the head of the BBC Tim Davie attempt last week to promote the impartiality of the Corporation by suggesting that climate change is no longer a political issue. To which it might be tempting to reply that Mr Davie no longer fears the approaching climate fireball, because he has already relocated to another planet. Perhaps he hasn’t seen the BBC’s climate editor Justin Rowlett become increasingly agitated with Boris Johnson because the Prime Minister refused to commit to shut down all coal mining. Or read the one-sided output of Roger Harrabin, the BBC’s Energy and Environment Analyst, whom Charles Moore suggests would be happier in a pulpit.

Almost two weeks ago, Jon Snow fronted an hour long Channel 4 News shaking with emotion as he introduced stories featuring fire, flood and climate collapse of almost biblical proportion. Last week he attributed a large plant blocking the rail tracks on his way to Glasgow to climate change. His behaviour might call to mind George Orwell’s famous quote that some ideas are so stupid “that only intellectuals believe them”, but Mr Snow is actually at the cutting edge of new academic research trying to shift the political narrative from global warming to “extreme” weather.

In 2020 the IPCC lead author Professor Reto Knutti published a paper entitled “Climate change now detectable from any single day of weather on a global scale”. This of course is the Holy Grail of climate activism. The last two decades have seen little actual global warming despite higher levels of mostly naturally produced CO2 entering the atmosphere. According to satellite readings published last month, the global temperatures haven’t moved for seven years. In fact, the current high points in the record correspond to the peak of the brief warming in the 1980s and 1990s, suggesting temperatures haven’t really risen for almost 25 years. Perhaps because of this, the move to demonise bad weather, or “extreme” weather, continues apace.

THE CREATOR OF THE 1.5C CLIMATE TARGET HAS ADMITTED THAT THE “SIMPLE NUMBER” WAS INVENTED FOR THE BENEFIT OF POLITICIANSREAD MORE