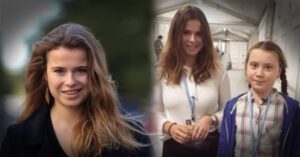 Luisa-Marie Neubauer, the “coach” of Greta Thunberg, is related to the founder of the Rothschild dynasty, Mayer Amschel Bauer, who changed his last name to Rothschild after returning to Frankfurt to take over his father’s business. Luisa Neubauers “job” is a climate activist and she volunteers for the ONE Campaign founded by Bono and Bill Gates, which also has ties to Soros.

Although she is Jewish through her father’s Rothschild lineage, her mother is part of a family of Nazi collaborators, the Reemstma family, one of the biggest tobacco and cigarette producers in Europe, whose scandals involving tax breaks during the Wiemar period were influential in destroying public trust in the government.

The Neubauers are also extremely influential throughout Racine, Wisconsin. Jeffrey Neubauer was Bill Clintons campaign manager for Wisconsin in 1992 and 1996, a member of the Wisconsin State Assembly and Chairman of the Wisconsin Democratic Party. He also has ties to education through his organization Higher Expectation for Racine County, and he will effectively be in control of 1 billion dollars being allocated to the Racine Unified School District through a rigged referendum recently endorsed by Joe Biden. By contrast, nearby Milwaukee received less than 100 million dollars for it’s education system. An example of how this money is supposedly going to be spent is to expand a failing IB middle school into a K-8. This school, Starbuck IB, is failing so badly that one has to wonder if it’s really a school and not a front for something else. IB programs are supposed to be elite programs for the smartest students, yet look at their test scores and disciplinary record.

Jeff’s sister is the actress from True Blood, Kristin Bauer van Straten, who lives in Racine. His wife, Lisa Neubauer is also the Chief Judge of the Wisconsin Court of Appeals and their daughter, Greta Neubauer, is currently a member of the Wisconsin State Assembly and was director of the nonprofit Fossil Fuel Divestment Student Network, which does the exact same type of activism that Luisa Neubauers organization “Divest! Withdraw your money!” did in Germany.

Luisa-Marie Neubauers wikipedia page is currently undergoing a lot of censorship that is easy to see if you look at the history of the edits.

Mentions of specific relationships to family members are being removed, as well as fully sourced lines like this:

She makes today’s political class responsible, especially white men from the northern hemisphere, for being painfully slow while implementing needed climate measures.[30] Therefore the northern atmosphere is obligated to decrease their standard of living to pay for the future change of the global south towards an environmental way of life.[31]
Luisa Neubauer was heavily criticized and accused of advocating social engineering for arguing that people in the western hemisphere should have fewer children as a means to address climate change. According to her especially women should be mindful with their desire to have children.[32][33][34]

All mention of Louisa Neubauers mother, Frauke Neubauer, and the fact that she is the cousin of the publicist and patron Jan Philipp Reemtsma, has been removed (I wonder if it may have something to do with the books he wrote about Theodore Adorno or being kidnapped for 33 days in 1996?) along with any mention of her three siblings, two of which live in England. The fact that her older brother Lennard played semi-professional football in Oxford and now lives and works in finance in London was also removed for some reason.

I think this woman deserves a lot more scrutiny right now while she tries to shy away from it. If anybody can find anything interesting about her or anyone connected to her, post it in this thread.