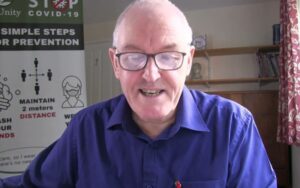 Pfizer’s new drug is meant to be used during COVID infection to help reduce severity of disease, very similar to what Ivermectin has been used for over the course of the pandemic. A comparison of these drugs shows that they are shockingly similar, and that Ivermectin might actually do more than the new Pfizer drug.

Campbell says that PF-07321332 only focuses on one biochemical modality of viral replication, yet, Ivermectin works against multiple biochemical modalities of replication. Campbell believes the use of Pfizer’s drug could cause the virus to evolve and be resistant more easily. This process would follow basically evolutionary biology tenets.

Ivermectin is a long standing anti-viral drug that many doctors and scientists claim has been working to reduce time of infection in patients with COVID. It’s a cheap drug that anyone can manufacture as no one owns the patents for it. But Ivermectin has been controversial, with much of the mainstream media alleging that Ivermectin is simply a horse de-wormer and should not be used to treat COVID-19.

It’s to be noted that it’s unclear whether mainstream journalists have spent any time truly looking into the benefits of Ivermectin, instead it appears they are in lockstep with statements coming from places like the World Health Organization.

With Ivermectin smeared as ‘useless’ within public discourse, Pfizer and Merck have created new and highly profitable drugs in its place.