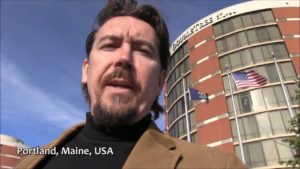 I am intending to produce a short film (around 10 minutes), which will
illustrate how peoples lives might change after the introduction of the new
monetary system which is currently being planned by the banking system.

I have tried to explain in previous Richplanet episodes, the dangers of
‘programmable’ money, and tried to explain that once it is introduced,
could easily bring about the end of human freedom. Because this is such a
serious issue and because it has the capacity to turn human beings,
literally into slaves, I think people need to be shown what the world could
become like after programmable money is introduced, rather than just told.
People need to be fully informed and shown why the eradication of cash is
so dangerous, and shown how it will completely change their lives, if they
allow it to happen. The purpose of the film is to warn.

I don’t have much experience in script writing or screenplay, so I am
appealing for viewers to help. I am asking for a short scripted piece,
lasting around 10 minutes. The piece will feature a central character or
characters, an individual or friends, a couple or perhaps a family. Or
perhaps even feature a few separate groups in different parts of the world?
The piece will feature the announcement of the introduction of
‘programmable’ money. It will then follow the lives of the characters and
show the changes which happen in their lives over a number of years,
possibly up to around 2030. Note here that our government might not choose
to call it ‘programmable money’, and decide to use a new name. So the
script needs to perhaps be vague about this. Other terms currently in use
are stablecoin, britcoin, CBCD and programmable money.

If I receive a suitable, compelling script, I will endeavour to make it
into a short film. I can offer 200 pounds for the script that I choose,
plus a copy of my latest book and other merchandise. I realise this is not
much, but I hope people will be driven by their conscience to write a
script, not by a reward.

Here’s what I would like the drama to portray

A huge global recession occurs in 2022 / 2023, this could be narrated with
news broadcasts or conversation between the characters. As a ‘solution’
to prevent any future recession, the government wants to introduce a new
type of money.

We will see the initial ‘selling’ of programmable money, by corporate
media and government to the public and the propaganda associated with it.
They will suggest that the new money will solve numerous issues in peoples
every day lives. Namely: economic issues, health issues, social issues and
security issues etc.

It will portray the character(s) downloading their new ‘app’ or CBDC
‘wallet’ for their new money to contain. Transferring or acquiring the
new currency, and then trying out their new accounts.

The drama will illustrate clearly the motives behind why the characters
stop using their cash, in favour of their new digital wallets. Those who
issue the new money will make the new money ‘better’ than cash, by
offering various incentives. There will also be subtle propaganda
stigmatising the few who still insist on using cash.

There will be a honeymoon period where it all seems ok.

The presence and use of cash becomes less and less over a planned period of
about 18 months. People aren’t that bothered because the new money seems to
be working better than cash. It will be illegal to use cash by 2026.

Conversation about how funny life now is without cash, and perhaps some
comments on how we “miss the cash”. But everyone is essentially happy
because at this stage the new money seems as good as cash.

Slowly, over the next several years, one by one, various restrictions are
placed on the use of the programmable money. The restrictions are applied
in real time at the point of sale. Numerous excuses will be given for the
restrictions, including health, environment and security.

I will leave it up to the imagination of the writer as to how this might
play out, and in what order things happens. It will be possible for those
issuing your new programmable money to place the following restrictions …

They can limit geographically where you are allowed to make purchases. This
could be used, for example, if another ‘pandemic’ was launched, to limit
peoples spending to within a short distance of their homes. There are other
excuses they could use for limiting geographical use, e.g., to reduce car
usage.

They can limit what you can spend your money on. So they will be able to
prevent you buying meat, or prevent you buying coal, or certain drugs,
specific food etc. Anything they don’t want you to buy, for whatever reason
they invent, they could sanction.

Similarly they could inflate sales of certain things by rewarding people
for buying them.

They will be able to limit the quantity of things you buy. For example they
could limit how many beers you can buy in one night. Or limit how much
sugary food you can buy. The excuse of ‘shortages’ could well be used to
limit your activity.

They will be able to put a cap on how much money you can hold in your
account. Or only top up your account with limited amounts, if you behave in
a certain way. They could limit your spending to a specific amount each
day. They could change how much you can spend if you visit another area or
country.

They can also vary how much money you pay for various goods. So they could
make prices of certain things outside of your reach.

They could also limit spending to certain times of day, or deny it
altogether.

Such a system will inevitably result in ‘tiers’ of types of user. In
other words some ‘important’ people who perhaps work for the government
or large corporations might have far less or no restrictions on their
spending. This will create a multi tiered society.

The amount that you are ‘punished’ by the system will be dependant on
your behaviour. For example if you express certain views online, your
spending limits or habits could be restricted. Your money could be switched
off altogether, if you are considered undesirable.

Two of the recurring excuses used to increase restrictions will be
‘repeated pandemics’ and ‘climate change’, among other engineered
threats such as cyber attacks. Plus, each individual will have their own
restrictions applied depending on their own specific behaviour. This would
make the ‘programmable money’ system very similar to the social credit
system that they currently have in China.

Over a number of years, the lives of the characters plunge into a dystopia,
under a technocratic invisible world government and dictatorship.

Here are some further ideas from Iain Davis

May I suggest it focuses on two characters who are friends. One in favour
of CBDC one opposed. I wouldn’t worry too much about time span as that will
mean you have to age the characters with all the hassle of makeup and
stuff.

Perhaps the opening scene could be the pair discussing their views on CBDC.
Then as it rolls out one sticks rigidly to cash and uses counter-economics
and the other simply follows CBDC.

Initially the non CBDC user struggles but they start building networks with
other non CBDC users. They could be ridiculed by their CBDC using friend.

Then as more and more of the restrictions you show begin to apply the
tables start to turn. The CBDC user faces all the limits you suggest while
the non CBDC users network of contacts and suppliers grows. Perhaps
ultimately ending with the CBDC user being denied food in a shop while the
non user buys a crate of vegetables from a man in a van with LETS tokens or
something.

One element I may add is that CBDC is set to control the cost of banking.
When they want people to spend they will set negative interest rates and
people’s CBDC will lose value in a bank forcing people to spend. When they
want to slow spending they will restrict the amount they can spend. Maybe a
scene where the CBDC user says to their non user friend I can’t talk now “I
have to go shopping. I have been allocated a 1pm – 3pm slot.”

If you’d like to send me a script, send it to richard@richplanet.net.

I will keep the request to send me a script open until at least 1st January
2022.