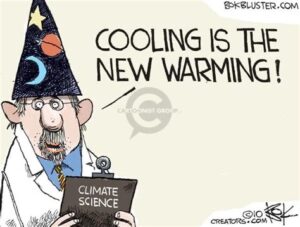 From the four corners of the globe the earth-savers came. By plane, private jet, train and automobile, choking Glasgow (The City Of Brotherly Love) with noxious fumes of petrol, diesel, aviation fuel and hairy unwashed armpits. Meanwhile 26 diesel-powered generators stood by to power the fleet of electric cars used to ferry around the grifting freeloaders participants. You’ll be relieved to know that Hellery arrived safely on her ecologically-friendly broomstick. The Chinese didn’t attend but issued heartfelt support for the green agenda given that they’d be building with their coal-fired manufacturing plants the electric engines, solar panels, wind turbines and rare earth batteries for the woke West. It’s a win-win. 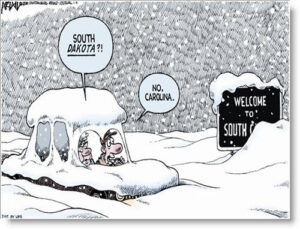 Climate predictions from The Science are grim. Almost as grim as those The Science has been issuing for the last fifty years when they held the first Earth Summit in Brazil. Here it was that Harvard biologist George Wald, sadly shaking his head, estimated that “civilization will end within 15 or 30 years unless immediate action is taken against problems facing mankind.” And where Peter Gunter of North Texas State University told us that “Demographers agree almost unanimously on the following grim timetable: by 1975 widespread famines will begin in India; these will spread by 1990 to include all of India, Pakistan, China and the Near East, Africa. By the year 2000, or conceivably sooner, South and Central America will exist under famine conditions.”

While literally scores of other experts made similar predictions at that Earth Day my personal favourite is the legendary Paul Ehrlich. “The death rate will increase until at least 100-200 million people per year will be starving to death during the next ten years. Most of the people who are going to die in the greatest cataclysm in the history of man have already been born. Between 1980 and 1989 he added, in case we weren’t suitably alarmed, some 4 billion people, including 65 million Americans, will perish in the “Great Die-Off.” He breathlessly warned that Americans born since 1946…now had a life expectancy of only 49 years and that if current patterns continued this expectancy would reach 42 years by 1980. (Life expectancy in the US today is just short of twice that!) His views were echoed by Denis Hayes, the chief organizer for Earth Day “It is already too late to avoid mass starvation”. Oh dear, so that’s that then. The conference attendees with furrowed brows then fretted as to how Antarctica would be able to accommodate the hundreds of millions fleeing there by the end of the millennium. Current population of Antarctica? 4,400.

Then again we might freeze to death instead of being roasted alive. You know, climate change. Again Paul Ehrlich is good for a laugh. Not long after his global warming horror predictions he suddenly – for reasons that remain unclear – changed his mind and said well, no actually, we’re going to freeze to death instead. Apparently by the end of the millennium half of Britain was to be covered by ice, the population driven to near starvation in a Mad Max dystopian world. “By the year 2000 the United Kingdom will be simply a small group of impoverished islands, inhabited by some 70 million starving people”. Many eminent climatologists supported him. “If present trends continue, the world will be about four degrees colder for the global mean temperature in 1990, but 11 degrees colder by the year 2000,” claimed ecology professor Kenneth E.F. Watt of the University of California. “This is about twice what it would take to put us in an ice age.”

As you can see the record of climatologists is (my favourite euphism) ‘mixed’. Either way the message from the COPS summit will not be good – we’ll either burn or freeze to death. But look on the bright side, the 30,000 attendees will have a great time.