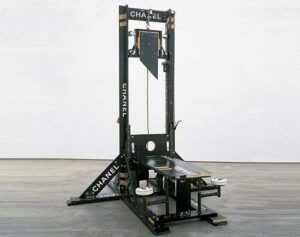 A few years back, there was much talk of FEMA camps in the US. There were piles and piles of plastic coffins shown in videos at the time. There was talk at the time of there being electric guillotines in the camps. Ridiculous I thought. I later read of the 7 Noahide laws, and that death by beheading was the punishment for disobeying them. That made me think. I recently had an email exchange with Alex Thompson on Uk Column about a guy who supported the Noahide laws. The Movie Greystate, who’s creator and director was killed along with all his family in a “shooting”, at home, showed a figure in a Freemasonic apron executing people on a guillotine. Tonight, I watched the attached video, which is actually the Hugo talks guy, Hugo, I assume, discussing these matters.