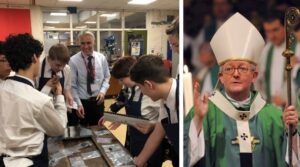 NEWCASTLE-UNDER-LYME, England (ChurchMilitant.com) A Catholic school in the archdiocese of Birmingham is refusing to reveal if the deaths of two of its pupils is related to the COVID-19 jab administered in a mass-vaccination drive targeted at teenagers.

Habib died on Oct. 24, followed a week later by Towers, who died on Oct. 30 in Stoke-on-Trent, a city in central England historically known for its pottery and ceramics. In England, Year 10 pupils are 14–15 years old and Year 11 pupils are 15–16 years old.

A source close to the school told Church Militant Habib died of a heart attack while Towers suffered a fatal brain tumor. Both conditions have been linked to the jab, with myocarditis — or heart inflammation — occurring in about 1 per 5,000 cases of vaccinated boys ages 12–15.

“Children are dying across the country as I predicted they would,” funeral director John O’Looney from Milton Keynes told Church Militant. “I emailed my member of Parliament several times, I have also emailed Boris Johnson and even the chief coroner of England.”

Children are dying across the country as I predicted they would.GabTweet

They do not respond because they are complicit. This is depopulation on a global scale. I said the experimental gene therapy would lead to deaths — deaths that would occur in children and adults. These deaths are now happening. I see the lies and death patterns firsthand. Now others in my profession are speaking out as well. They are all very scared.

For many months I have been warning of the lies around COVID and the great effort made to force, blackmail and lie and frighten people into getting an injection. These people [our rulers] are totally aware.

O’Looney adds that his only comfort “is that God will judge them for this evil they do to others. I pray daily that He does so very soon.”

Habib and Towers died over the half-term holidays after a mass-vaccination campaign at the Shelton Primary Care Centre on Aug. 26 run by Britain’s National Health Service (NHS).

Scores of youngsters lined up to receive the Pfizer jab including 17-year-old Sayen, a pupil at St. John Fisher Catholic College. Sayen’s mother Amanda Masterson told media she was responding to “a text message from Grab-a-Jab” advertising “a walk-in clinic today.”

In the first week of August, the NHS began persuading 16- and 17-year-olds across England to get jabbed. Days later, the state-run health provider opened walk-in sites all over England making China-virus shots available to children over the age of 12.

Since then, the Office of National Statistics (ONS) has recorded “a significant rise in deaths among teens against the five-year average with some weeks seeing an increase as high as 125%.”

Post-inoculation deaths are small, but not negligible, in children.GabTweet

The rushed Pfizer vaccine trial found that vaccinated children had nearly six times the risk of suffering a severe adverse event in the two-month observation period compared to children who did not get the jab.

Consequently, the Joint Committee on Vaccination and Immunization (JCVI) advising the British government recommended against vaccinating children over 12, noting “increasingly robust evidence of an association between vaccination with mRNA COVID-19 vaccines and myocarditis.”

Under pressure from the government, the United Kingdom’s four chief medical officers overruled the JCVI advice insisting the “the most important [decision on recommending vaccination] in this age group was impact on education.”

British local media reported several “sudden” deaths occurring in England in the month of October including an 11-year-old girl who suffered a fatal heart attack at Moat Community College, Leicester.

A Year 10 pupil at Springwood High School, Kings Lynn, Norfolk, is reported to have “died in her sleep” and a Year 12 girl from King John School in Essex, is said to have died “unexpectedly in her sleep at home.”

Dr. Michael Head, senior research fellow at the University of Southampton maintained: “There are no deaths in U.K. teenagers known to be caused by the COVID-19 vaccines.”

However, a peer-reviewed study in Toxicology Reports concluded that “post-inoculation deaths are small, but not negligible, in children.”

“Clinical trials for these inoculations were very short-term (a few months), had samples not representative of the total population, and for adolescents/children, had poor predictive power because of their small size,” the researchers warned.

Vaccine uptake has been low among under-18s as a September survey of 28,000 students age 9–18 years in England revealed. Researchers found just 51% of 13-year-olds were willing to get the jab, compared with 78% of 17-year-olds.