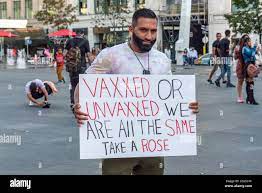 In the UK you’re legally protected from discrimination by the Equality Act 2010.

It is against the law to discriminate against anyone because of:

These are called ‘protected characteristics’. – https://www.gov.uk/discrimination-your-rights

Yet care workers are being sacked because they hold the scientifically justified belief that vaccines are dangerous.

So here is the question. Which is the more important to vaccinated people – their PAYCHEQUE or their MORALITY?

By a concerned reader

You might think the answer is obvious. My morality can wait, my paycheque cannot. That is short term thinking. And it is fundamentally flawed. The purpose of this article is to explain why it is flawed and how we shall eventually defeat this present medical tyranny.

It we all choose our paycheques over our morality. then we permit the government to discriminate against the unvaxxed unchallenged.

We signal to them that they can achieve any goal they wish to achieve through financial pressure.

This will empower them to complete their agenda to take over not just our health through mandatory vaccines, but our lives through a social credit score linked digital smart currency.

They will abolish dead dumb money and replace it with a living smart currency which will require a real time social credit score linked government authorisation for every single financial transaction we do.

“Funds available but transaction refused due to insufficient social credit score”, you will be told – by your own money !

It will mean that having the money to pay for something will not guarantee that you can buy it. You will need to have the required social credit score for any particular purchase or deal.

And do not be so naive as to believe that social credit scores will be equitably assigned or implemented. If someone with power does not like you, your credit score will magically drop. The whole system is a fundamental abuse of human rights. So it will be just as abusive in its implementation as it is in its conception.

In other words, your money will no longer be your money. It will be the government’s money. Yes. You will lose your paycheque entirely. We will all lose our paycheques.

But the robbery will not stop there. You will lose not only your paycheque but actually your entire working capital. You will lose all of your savings. You will lose absolutely everything you have. The government will steal every penny and every asset you have..That is what is at stake here.

If on the other hand we choose morality over paycheque then the unvaxxed will not lose their jobs because sufficient numbers of their work colleagues will resign in support of their rights to work and people will refuse to work for vaxxist employers.

Then the government will lose its bet that we will abandon our morality in order to keep our paycheque. And we will keep both our freedom and our paycheques.

For it is surely self evident that the defining lesson of the 20th century was do not discriminate, isolate, demonise, segregate, exclude, imprison, kill or otherwise abuse any sector of society on the basis of their race, skin colour, creed, disability, religion, sexual orientation, or politics.

If so, then you have learned nothing from the 20th century. and you are the modern day Nazi collaborator and Apartheid facilitator. Your moral compass is broken.

The unvaxxed have taken their stand against the new tyranny. But their stand will fail unless they are supported by the vaxxed.

Here is a taste of what is to come to all of us, emailed to me from an unvaxxed Austrian on November 18…

“The waitress of the inn informed us yesterday after college that there was a vaccination check police raid at around 10:30. Two police men blocked the backdoor exit while two others entered from the front to check the vaccination certificates. All they were doing was looking for unvaxxed people (fine 500.- EUR).

As one main college program ends tomorrow, many of my colleagues gathered yesterday evening outside the campus at the parking lot to celebrate their marks. There was a police control for vaccination certificates at around 8pm and another at 9:30pm. Everyone was outdoors but still they harassed people as unvaccinated are allowed to go outside for a smoke but not to meet in a group like this. It’s horrific.

Between 7000-10000 people gathered yesterday evening in Graz to protest against the government. There was no mentioning of it in the main media. There will however be a demo of up to 100k people in Vienna on Saturday.

I see my country falling apart.”

Austria can go a lot further than that as we all know only too well.

So either we stop this now by refusing to work for vaxxist companies, refusing to vote for vaxxist politicians, by suing vaxxist employers for unfair dismissal, by refusing to buy from vaxxist outfits, by refusing to attend events which are hosted by vaxxist performers or vaxxist management companies, by refusing to give our patronage to vaxxist theatres and vaxxist venues. Or we all become Nazi collaborators enjoying a night at the vaxxist opera and dining at the finest vaxxist restaurants whilst our unvaxxed brothers are languishing in isolation centres at best and dying in concentration camps at worst.

The Expose has done a thorough job through dozens of properly researched articles in presenting the overwhelming evidence that the viral load in the doubly vaxxed is presently higher than in the unvaxxed and therefore vaccines make people more likely to spread delta not less.

This means that vaccine passports which enable the vaxxed to move freely and limit the movement of the unvaxxed will actually increase Covid cases, hospitalisations and deaths, rather than decrease them. There is absolutely no valid epidemiological basis for a vaccine passport. That pretext has completely backfired. So today, with what we now know, one cannot hide one’s conscious, one’s subconscious or one’s unconscious vaxxism behind a facade of epidemiological legitimacy. The question is no longer medical. It is entirely moral.

If you are wondering what a fully immoral world would look like? Wonder no more. It would look like a cemetery. Because contrary to the title of Ms. Minnelli’s song: Money does not make the world go around. It stops the world going around for everybody with insufficient funds to rotate.

It is morality that keeps this planet spinning. It is human will that is the most powerful force upon it, not greenbacks. It is the heart that determines what happens in this realm not the pocketbook, and that is where the globalists have grossly miscalculated. Because there is no spreadsheet, no smart currency, and no social media databank that can bind the human heart or can imprison the human spirit.

So I look forward to the day when Morality triumphs over the Paycheque. And I encourage all readers to make the only sustainable choice sooner rather than later.

Are you a Vaxist? Vaxism is the new Racism

7 Responses to “Are you a Vaxist? Vaxism is the new Racism”