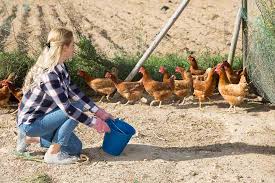 Although they do learn from one another, and will often help a sick relative or companion, animals don’t rely on outside help when they are ill; they self-medicate.

Sadly, the animals on modern farms are denied the opportunity to treat themselves. They are crammed into fields or barns where there is little space and little or no opportunity to self-medicate by changing their diet. All they have available to eat is what is provided by the farmer: grass (if they are in a field) or special feed mixture (if they are in a barn). Their diet bears no relationship to the sort of food they would choose to eat. There is no access to the variety of natural plants which enable them to self-medicate.

Just as bad is the fact that the animals on modern farms are often denied sunlight and exercise. The farmer’s sole aim is to turn the animal into meat (and other products) and eventually into profit. The result of the physical overcrowding is that parasites and disease spread quickly and easily, psychological problems develop and the animals cannot treat themselves.

The treatment comes from the farmer and, inevitably, involves the use of powerful drugs. Often drugs such as antibiotics are included in the animal’s feed on a long-term basis. When an animal falls ill it is in the farmer’s commercial interest to hide or cover up any illness if there is a chance that this may restrict the farmer’s ability to add the animal to the food chain. The piece of meat you buy from the butcher or supermarket could contain a hidden lump of cancer.

When animals are ill they take a holistic approach to self-healing. If, for example, they have an infection they will take a variety of different types of action to protect and mend themselves. So, for example, if they have intestinal parasites, chimps will do three things: they will chew plants which contain multifunctional healing compounds; they will eat termite mound soil which is able to secrete antibodies and which has the medicinal healing properties of clay and they will swallow folded hairy leaves which catch worms and help speed their expulsion.

When allowed to live naturally, chickens live in small groups in woodland areas. They scratch around on the forest floor eating worms, insects and bits of fresh plant. They use the dust and the sunshine to keep their feathers bright and when it rains they take a shower to add a little lustre. At night they roost in trees (their claws are adapted for hanging onto branches even while they are asleep) so that they are safe from predators.

Chicken farmers have selectively bred chickens to grow faster and faster. They have doubled the maturing speed in the last two decades and have created birds who grow so fast that their heart and circulation cannot cope. The birds are constantly ill. Their bones are incapable of supporting their excess weight and so they frequently suffer broken bones. They then die of thirst and starvation because they cannot reach the automated food and water delivery points in their cages.

Eight out of ten broiler chickens suffer broken bones. Around 17,0000 birds a day die in the UK of heart failure. The chicken farmers regard this as an affordable cost. The food the chickens are given is selected according to price. One of the ingredients is ground up dead chickens. The chickens are routinely fed antibiotics (to stop the weakened birds getting infections and to help boost muscle growth) despite the danger that this creates for humans. They are kept in the half dark so that they keep quiet and there is, of course, no air- conditioning so in hot weather the heat in their cages is unbearable. The chickens stand in their own excrement (which is acidic and so it blisters their feet) and they breathe in fumes; dust and bacteria from their neighbours. They are given no freedom and no chance to self medicate. Despite the fact that many broiler flocks are colonised with bugs which can cause neurological problems, arthritis, headache, backache, fever, nausea, pains and diarrhoea millions of people eat chicken every day.

Doctors and scientists experiment on animals in a vain attempt to find new cures for human ailments and yet they learn little or nothing from observing animals. Holistic practitioners should learn from everything they see or hear.

From animals we can (or should) learn that successful good health depends primarily on avoidance and prevention. Treatment is a last resort — to be used when things have gone wrong.

Doctors haven’t learned much from animals because neither avoiding illness nor preventing it offers great opportunities for profit.

Doctors could learn a great deal too by watching how animals deal with disease.

For example, cattle will treat themselves when they are ill if they are given the chance (which they usually aren’t).

Ranchers in Utah used to turn out sick cattle who had diarrhoea, expecting them to fend for themselves in the wild. To begin with, they were surprised when, after a few days away the cattle returned, quite well again. What had happened was that the cattle had travelled to clay banks and had fed on the clay until they got better again. Clay works very effectively in the treatment of intestinal poisoning because it absorbs toxins and viruses. In the UK the medicinal benefits of clay are ignored and so every year 170,000 calves die of diarrhoea caused by bacterial infections. (This only goes to prove how stupid the average farmer must be. How much does clay cost?)

Cattle aren’t the only animals to use clay to counteract the effects of poisoning. Animals throughout the world use clay for this purpose, knowing that it detoxifies by binding onto harmful substances. Why don’t humans use clay? Why don’t doctors prescribe it? Why don’t first aid kits contain clay pills? The answer, as it so often is, is bureaucracy. In the UK, for example, foods and medicines are dealt with by different Government departments and clay isn’t accepted as a food or a medicine. So it can’t be prescribed or used by anyone except wild animals.

One Response to “What We Could Learn from Animals”