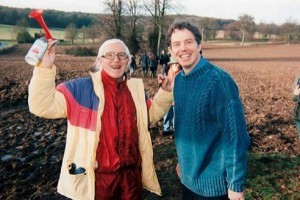 I suppose you must have been struck by the bizarre and unlikely backgrounds of so many of the West’s leaders at some stage. Tony Blair, failed Parliamentary candidate and struggling barrister, deeply unpopular at school, with murky accusations of homosexual pandering swirling around him, yet skyrocketing to the PM’s office. Macron, a freak who married a woman old enough to be his mother and whose first and only role in politics was the highest office in the land. Same with Draghi – straight into the top position despite having zero political track-record. Merkel, a colourless Communist apparatchik from East Germany and almost certainly a Stasi spy who was “imposed” (his own words) on Chancellor Helmut Kohl as his her-apparent. Ardern, Varadker and a host of others achieved similar meteoric and otherwise inexplicable rises.

But nobody comes close to the Gay Mulatto, the multi-named Barry Soetero. Imagine you run a HR department at a corporation. One day this guy walks in. Nice looking resume, good talker, reasonably intelligent. So you ask him where he’s from. Hawaii, he says. So you run his Social Security Number and it belongs to a guy from Connecticut born in 1890. He doesn’t look that old. Residence? Chicago. Current Occupation? Community Organiser. So you look into the Illinois Bar Association and find both he and his wife’s law licenses have been suspended. Also, the organization he worked for has multiple convictions for voter fraud.

So you get curious. Parents? American mother, Kenyan father, adopted by an Indonesian National at age 6. Interesting, but you’re a progressive, open-minded sort, and who has a ‘normal’ family these days anyway? Got a Birth Certificate? Yes, a short form, unofficial one. Education? two years, Occidental College on a foreign students’ Scholarship. Which Country? Indonesia. Transcripts? No. Columbia University BA Political Science/Pre-law. Transcripts? No. References? None. Student Organizations? None. Well you have a few Columbia grads in the firm, so you ask around. Nobody knows him. Hmmm. Harvard Law JD. Transcripts? No. References? None. Publications? None. Ahh, but I see you’ve already written an autobiography. Remarkable. And according to the publisher’s note you are a citizen of Kenya.

Married? yes, to Big Mike. I mean Michelle. Who drove you to today’s interview? My body man. huh? Hobbies? Cocaine, marijuana, bath houses. Looking further down the resume, you find Letters of Reference from a former leader of a domestic terror organization, a Black Nationalist preacher, and a convicted racketeer named Tony Rezko.

Alright, Mr. Soetoro, or is it Obama? Mr. Obama, you’ll be President one day.

Go figure. In my opinion they got selected for top office by the so-called elite not despite their weaknesses, inexperience and dark secrets but because of them. It’s a feature not a bug. Step out of line and we pull back the veil. You must admit it’s a pretty effective scheme.