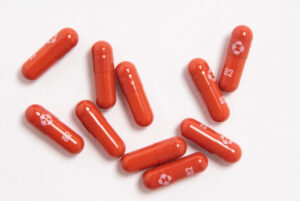 On Friday, American pharmaceutical giant Merck announced that new data from clinical trials of its Molnupiravir drug showed a reduced risk of hospitalization or death from COVID by up to 50%. The antiviral treatment, unlike other COVID treatments available today, is groundbreaking as it comes in a pill form that is easy to produce, distribute, and administer.

“You can take it home and it will significantly reduce the risk that you either ultimately are hospitalized or more importantly that you would ever face the unfortunate outcome of death,” Merck’s CEO Rob Davis said, as per CBN News.

According to a statement released on Friday, phase 3 clinical trial results showed that Molnupiravir reduced the risk of hospitalization or death by approximately 50%. There were no deaths reported among patients who received the drug, versus 8 deaths in the patients who received the placebo. Merck already plans to submit an application for Emergency Use Authorization (EUA) to the U.S. Food and Drug Administration based on these findings.

Given that Merck’s new “gamechanger” pill against COVID is an anti-viral drug, some cannot help but compare it with Ivermectin, a drug that has been widely used to treat COVID despite the FDA and CDC’s advice against it. In fact, skeptics are wondering why Merck, who also produces Ivermectin, has now dropped it and instead has focused on Molnupravir.

According to The Blaze, a Cochrane-standard (the highest level review) meta-analysis on Ivermectin’s efficacy in treating COVID has been published by Bryant-Lawrie in the American Journal of Therapeutics. The study concluded that “apparent safety and low cost suggest that Ivermectin is likely to have a significant impact on the SARS-CoV-2 pandemic globally.” So why isn’t Merck just pushing Ivermectin instead?

The reason is that Molnupiravir is reportedly very similar to Ivermectin. Moreover, the New Jersey-based pharmaceutical company was compelled by a $1.2 billion procurement agreement to supply approximately 1.7 million courses of Molnupiravir to the U.S. government.

The report added that “it appears that Molnupiravir contains some of the same molecular qualities as Ivermectin,” which is why it is questionable how Merck possibly rebranded the cheap drug to make it “more expensive” and could be “marketed as exclusive and new for COVID.”

Merck’s new drug shares molecular similarities to #Ivermectin. And why wouldn’t it? IVM is in a COVID-19 superstar lane all by itself and Merck, who held the patent until 1996, knows this.

It is criminal for the U.S. to pay Merck $1.2B when we already have the GOAT. https://t.co/jmc7pmmvj8

Fox host Lisa Boothe blasted Merck via Twitter, saying, “This is all such a scam. We could repurpose Ivermectin for so cheap. None of this is about public health, it’s about cashing in or paying in favors for Big Pharma.”

Meanwhile, BlazeTV host Steve Deace took to Facebook to satirically express his thoughts of preferring the “glorious vaccine” over any type of COVID treatment, no matter how inexpensive and accessible it may be.

“I’m absolutely ecstatic to see that after Merck made sure to discredit their own failed drug Ivermectin, they are now coming out with a REAL oral early treatment for COVID,” Deace wrote. “I don’t think Merck should’ve even done that. Glorious vaccine or death!”