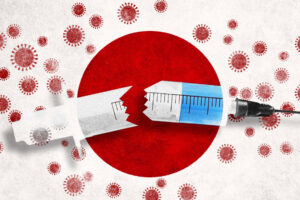 The ongoing COVID-19 nonsense here in the United States exists solely and exclusively because our governments have failed to use the correct treatment.  They used so-called “vaccines” when Japan has just proven, in less than ONE MONTH, that Ivermectin can wipe out the disease.

Sweden’s Public Health Agency on Wednesday recommended a temporary halt to the use of the Moderna COVID-19 vaccine among young adults, citing concerns over rare side effects to the heart. It said the pause should initially be in force until December 1, explaining that it had received evidence of an increased risk of side effects such as inflammation of the heart muscle (myocarditis) and inflammation of the pericardium (pericarditis). {link to CBS News (Secure)]

Finland, Denmark and Norway have also moved away from the COVID vaccines.

Norway on Wednesday advised that all under-18s shouldn’t be given the Moderna vaccine, even if they had already received one dose, and recommended that men under 30 consider getting the vaccine developed by Pfizer Inc. and BioNTech instead. Norwegian officials cited U.S., Canadian and Nordic data, saying the absolute risks remain low and calling the advice “a precautionary measure.”

The European Medicines Agency said Thursday that new preliminary data from the Nordic countries supports a warning the agency adopted in July that inflammatory heart conditions called myocarditis and pericarditis can occur in very rare cases following vaccination with Covid-19 shots made by Moderna and Pfizer-BioNTech.

By far, however, the absolute superstar among foreign nations dealing with COVID is Japan.  Japan has PULLED the vaccines and substituted Ivermectin – and in one month, wiped COVID out in that country!

Just so you understand the timeline.

By September deaths from the COVID-19 Vaccine jabs were being investigated.

At roughly that time, the vials were under scrutiny and metal “magnetic” material was found in them.

A month later, the Western press is shocked that COVID has all but disappeared from the island.

This is what it looks like in a country that still has rule of law. The governemnt responds to reports of death and contaminated vaxes, moves to real treatment, people get better, and the virus disappears.

Now compare that to what is happening in the United States and in Australia and New Zealand.  All three countries are in dismal failure in their handling of COVID-19, and that failure has resulted in staggering loss of freedom and destruction of commerce.

This is the biggest news story right now.

Japan has ended COVID. It did it after it stopped the vax rollout and went to Ivermectin.

If your government really wanted to end COVID, if that was its true goal, it would do what Japan did.

You can use Japan as a case study any time someone starts yammering some crap about how the vax is about helping you help yourself from getting others sick with what they’ve been vaxed against.

You use it as a case study when they try to make some lame argument about how the government is really really really trying its best to end COVID and it is the MAGA crowd that is causing the variants and keeping the virus around.

Japan stopped vaxing.  Japan went to IVM.  Japan is COVID-free. It did it in less than a month!

It says the conspiracy theorists were right! They were right. It is a damning conviction of the narrative that the government is somehow a benevolent force against you getting viruses.

No, because we now have historic precedent of a government doing the right thing and getting the WIN.

If your government won’t do it, it is because the vax is about something other than the public good.

Hmmmm. What could it be about? How about totalitarian control!

Japan got started vaxing later, and quit earlier than Massachusetts. Massachusetts is still fighting COVID with a couple thousand breakthrough cases per week. Japan is done.