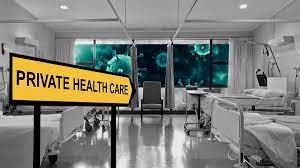 It is now pretty well accepted that in the UK, as in the rest of the world, thousands of elderly patients were deliberately killed during the first six months of the covid fraud with midazolam and through being denied basic medical care.

And it is becoming clear just how ruthless the Government was in ensuring that the genocide went ahead without hindrance.

For example, it is now known that private hospitals in the UK were paid billions to close their doors to private patients. The story was that they were being closed so that they could help support the overworked NHS during the pandemic.

But the figures show that the NHS was never overworked. Indeed, parts of it – including intensive care wards – were quieter than usual.

In order to ensure that the private health hospitals didn’t interfere with the genocide, a total of 7,956 private beds were rented at £400 million a month. Taxpayers had a bill running into billions.

But for 39% of the days paid for those beds were completely empty.

A total of 187 private hospitals were rented (together with their staffs) but they treated an average of just eight covid patients a day. The vast majority of beds remained empty.

This was clearly part of the genocidal plan.

If private hospitals had remained open umpteen thousands of patients would have been able to obtain treatment outside the NHS. Patients with cancer and heart disease could have been treated.

And thousands of lives would have been saved.

Vernon Coleman’s international bestseller `How to Stop Your Doctor Killing You’ is available as a paperback and an eBook.