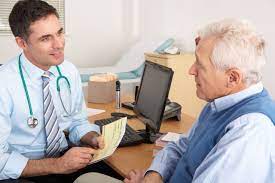 According to The Guardian, which is a self-styled British newspaper with financial links to Bill Gates, someone called Professor Martin Marshall, who is described as the chair of the Royal College General of Practitioners, is quoted as having said: `The narrative being peddled, that remote consultations are substandard to those delivered in person is dangerous.’ I suspect the quote was accurate because it fits The Guardian’s new status as a propaganda sheet – little more than a government press release with a sports page and a knitting pattern attached.

Marshall also reported that the problem in general practice is not that GPs aren’t seeing patients face to face but that there is a shortage of GPs.

Now, I am reluctant to criticise Professor Marshall, but I’m going to. I think that if he really said that then he was talking through an inappropriate orifice. Indeed, in dog Latin, the traditional language of medical men throughout history, I would describe it as onus bollocks – which, when translated turns out to be a load of bollocks.

And he’s wrong about the number of GPs. There are plenty of GPs. The problems are entirely a result of working practices which seem designed to fit in with the new digital world – whereby everything is done remotely, children are taught by computer and cash will disappear. Today’s GPs are swamped with aides, assistants, pointless busy bodies and computers. They would, perhaps, be more efficient if they made their lives simpler. They have allowed themselves to be dragged into a stifling bureaucracy which has resulted in GPs being separated from their patients. Most GPs seem to have little or no understanding of their patients’ needs. There is far too much jabbing and far too little caring.

Professor Marshall, and other members of the medical establishment are on the defensive because GPs are being attacked for insisting on providing their patients with telephone consultations or video consultations instead of proper face to face consultations.

When the covid-19 hoax started, GPs used the threat of some sort of plague as an excuse to pretty well close their surgeries. There was even talk of doctors refusing to give essential life-saving injections because they regarded any contact with patients as being too dangerous for them to consider. Traditional medical ethics about putting patients first even if it meant putting oneself at risk – would have been tossed out of the window if they had found a member of staff brave enough to open a window.

There never was a plague, of course. The figures prove that fewer people died in the last eighteen months than would have died in an average sort of year. The figures show that covid-19 was never any more dangerous than the annual flu. And some members of the medical establishment now accept this. They are moving onto the next stage in Agenda 21 – using the absurd, unscientific myth of global warming as an excuse for keeping patients at arms’ length.

Those doctors who claim that a telephone consultation or a chat via a laptop screen is an excellent substitute for a consultation in the surgery are practising a different sort of medicine to the sort I was trained to practise. My friend Dr Colin Barron agrees with me that even a zoom consultation is a damned poor substitute for a proper consultation with the two participants actually in the same room at the same time. When I practised the rule was simple: I only ever did phone consultations at night or at weekends and bank holidays and at the end of every phone consultation I asked if the patient was satisfied or wanted a home visit. I’m sure most doctors did the same. I reckon no more than 10% of consultations can be safely or satisfactorily conducted on the telephone alone. Most consultations require some degree of physical examination – even if only to provide reassurance.

Astonishingly, around 50% of GPs now say that a return to pre-hoax numbers of face to face consultations won’t be possible and around 80% say it isn’t necessary. Amazingly 57% of GPs say the flexibility of remote consultations has benefited care overall. I wonder if the patients who spent hours trying to get through to their doctor or a receptionist would agree that care has benefited. The truth is that the GP service is not fit for purpose. And is a main reason why ambulances can’t cope and why accident and emergency services at hospitals are appalling.

The fact, of course, is that there was never any medical reason for doctors to stop doing face to face consultations. There was never any need for social distancing. Masks were always doing more harm than good – and killing thousands of patients. Refusing to see patients face to face was based on entirely false unscientific fear and, I’m afraid, a potent mixture of stupidity and laziness.

It isn’t difficult to find evidence supporting my claim.

When a doctor talks to a patient on the phone, or gets brave and allows her camera images to intermingle with the patient’s, she has a number of disadvantages.

She cannot listen to the patient’s chest, she cannot palpate his or her abdomen, she can’t look in the eyes or the ears. She cannot put her finger in any relevant orifices, she cannot smell ketones, she can’t spot the pathognomic hair texture of the patient with myxoedema. She cannot satisfactorily examine rashes or other skin and nail lesions. She cannot provide support or encouragement. It’s difficult to offer hope when you’re isolated behind a computer screen. And hope is, of course, the true element of humanity. The elderly, in particular, often find computer cameras enormously intimidating.

A doctor trying to examine, diagnose and treat a patient at a distance is working with both hands behind their back – at least.

And the evidence is pretty clear.

The senior coroner for Greater Manchester reported that five patients who died might have received better treatment more quickly if they had been examined in person.

What GPs don’t seem to realise is that in 2008, Dr Simon Fradd analysed over 2000 telephone consultations conducted by GPs. Each consultation lasted five minutes. Over half had to be followed by a face to face consultation lasting ten minutes. Dr Fradd suggests that the current system will lead to a 7% increase in workload compared to seeing all patients in person.

`Patients generally want to visit the surgery to consult a doctor,’ says Dr Fradd, `and telephone consultations leave neither the doctor nor the patient fully satisfied. This increases GP stress and leads to further appointment requests – yet more work for the GP.’

At the moment GPs are less popular than the police, estate agents and traffic wardens – and only slightly more popular than journalists working for the mainstream media. And GPs only have themselves to blame for this.

If GPs want to be loved again then they need to abandon their computer screens and start seeing all their patients in the surgery – where they can be properly treated.

And Professor Marshall might like to reflect on the thought that if diagnoses and treatments are to be decided by computer then there won’t be any need for human doctors.

It has been established that computers are better at making diagnoses – and offering the right treatment – than humans.

If GPs don’t get back to seeing patients in person then they’ll have to retrain as something else because they won’t be needed. And they’ll have difficulty in finding a job that pays as well for such short hours – and allows them to work from home.

And it won’t be long before patients start suing doctors for making mistakes because they’ve relied on phones and computers.

Vernon Coleman’s international bestseller `How to stop your doctor killing you’ is available as a paperback and an eBook. (A surprising number of doctors think it an excellent survival guide.)

One Response to “GPs: Betrayal, Genocide and the Truth”