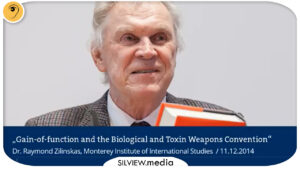 I dug out for you a big gold nugget from a Johns Hopkins specialist who also inspected Iraq on behalf of UN searching for bioweapons. If you pay close attention, this talk delivers powerful details on GoF beyond the scope of Russia.

The speech has only been recorded in audio:

Zilinskas has worked for the U.S. Office of Technology Assessment, the U.N. Industrial Development Organization, the University of Maryland Biotechnology Institute, the School of Hygiene and Public Health, and the Johns Hopkins University. In 1994, he twice served as UNSCOM biological inspector in Iraq. Currently he directs the Chemical and Biological Weapons Nonproliferation Program at James Martin Center for Nonproliferation Studies, Monterey Institute of International Studies, California.