The anti-parasitic medication has been a bone of contention in the Covid debate for months. What is the argument about? And who is right? 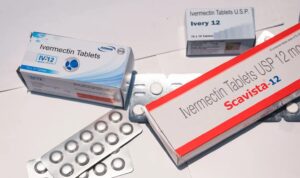 Since quite early on in the pandemic narrative the discussion of non-vaccine treatment or prophylaxis has been surprisingly fraught.

The first and most widely known medication to get caught in this tug-of-war was hydroxychloroquine, an anti-malaria medication used all over the world for decades.

More recently, the treatment for “Covid19” being most hotly debated is ivermectin, even resulting in a legal proceeding brought against the WHO by the Indian bar association.

The mainstream position is that anyone supporting ivermectin as a treatment/prevention for “Covid19” is “spreading misinformation”, but the drug’s champions say there is hard science behind their position.

Some readers have even been critical of our “Covid Crib-Sheet” not mentioning the drug.

But what actually is ivermectin? Can it “cure covid”? And is the controversy entirely organic or in some way conbtrived?

Ivermectin (a member of the avermectin family of medications) is a chemical anti-parasitic agent first discovered in 1975.

It is on the World Health Organization’s list of “Essential Medicines” – treatments the WHO considers should be widely available in all countries – and is used to treat a wide variety of parasites in humans and animals.

In 2015, the team that discovered ivermectin was jointly awarded the Nobel prize for medicine.

None of this was in any way controversial prior to 2020.

Following early reports that ivermectin could be used to lessen Covid symptoms, the mainstream media turned their collective fire on it (just as they did with HCQ last year). Any doctor suggesting the treatment was said to be a quack, and celebrities (such as Joe Rogan) who claimed they had been cured by it were said to be “spreading dangerous misinformation”.

The suggestion spread across the media that ivermectin was used only on animals, and “anti-vaxxers” were openly mocked for “drinking horse de-wormer”.

The most blatant example of this disinformation campaign was a story in Rolling Stone magazine, which claimed that ER departments in Oklahoma were so over-run with ivermectin poisoning that they were turning gunshot patients away at the door.

This story was shared far and wide….until Rolling Stone was forced to retract it, when a letter from one of the hospitals concerned was published, saying that, not only were they not “overrun” with ivermectin overdoses, they had never seen a single one.

So clearly, whatever the reality, there is a lot of anti-ivermectin propaganda out there.

OK, BUT DOES IVERMECTIN CURE COVID?

Well, that’s a complicated question. There are one or two studies that claim it does. A study from June 2020 claimed ivermectin “inhibited viral relication in vitro”, and this meta-analysis from August this year, found:

But there are two problems with this.

Firstly, there is (so far at least) no physical explanation as to why this should be the case. Ivermectin is an anti-parasitic. It functions as an invertebrate neurotoxin, weakening the cell membranes of parasitic neurons, causing paralysis and eventually death. Viruses do not have cell membranes, let alone neurons, so there’s no known physical reason ivermectin should have any impact on any kind of virus, and it’s never been used to treat viral infections before.

Now, it’s never really been the subject of prolonged studies as an antiviral agent either, so there’s no real data either way.

They are the only tool available for “diagnosing” someone as infected with the sars-cov-2 virus, and they are not fit for purpose. It’s impossible to tell someone with a “symptomatic Covid infection” from someone with the flu and a false positive test.

That being the case, any study being done on “covid patients” is by definition unreliable. It’s possible the people in the study just had a cold, or some other virus. Since over 99% of “covid patients” survive, it’s perfectly possible everyone who took ivermectin would have survived anyway, and we can’t know that the drug had any impact at all.

Since it’s almost impossible to establish who has “covid” who does not, no study done on “covid19 patients” can ever really be scientifically sound.

SO, SHOULD WE ENDORSE THE IVERMECTIN TREATMENT?

Well, first of all, OffGuardian is not here to recommend any medical treatment. We are not in the business of giving out medical advice, that is not the purpose of the site. We simply report facts that get neglected by the mainstream.

It’s certainly true that ivermectin has been around for a long time, and has always been considered safe and effective for a wide variety of conditions and is approved for off-label use (the anti-ivermectin fear-porn in the media is misleading in that regard). Therefore doctors should be free to prescribe the treatment if they see fit, and patients should be free to take it.

However, there is a distinct danger in spreading the “ivermectin cures covid” story, because it concedes ground to the official narrative that we shouldn’t be conceding. Just as with the “vaccines make variants more dangerous” story, the “ivermectin treats covid” angle reinforces the idea that there is a scary new virus out there that requires some kind of special treatment.

If you take that position, you put yourself in a situation where all the mainstream has to do is proclaim the existence of a new “ivermectin resistant variant”, and suddenly you have been swallowed up completely by the official story. Or maybe Pfizer et al. will release a new “refined ivermectin for treating Covid”, get it added to the vaccine passport card, and make using it a requirement to take part in society.

Either way, you’ll end up back where you started, giving money to Big Pharma and endorsing the fake reality they created.

It could even be argued that the hysterical and provably false denouncement of ivermectin in the press was done to stir up outrage, cause a distraction, and attempt to divert the covid sceptic conversation down a potentially blind alley.

There is no distinctly dangerous virus. We are not facing any kind of new threat. We don’t need to take anything or prevent anything or fight anything.

This position can be supported by solid facts and rational arguments, so we should stick to it until some other real solid facts can force us to move.

So no, ivermectin isn’t some super-toxic horse de-wormer, that should never be used on humans and is killing off deluded “anti-vaxxers” left and right. But there’s not much evidence it’s a magic “Covid cure” either.

Which is fine, because we don’t really need one.