The body can reject foreign matter, given time.  Surviving the vaccine onslaught short term is the first requirement.  Some stop after one vaccine.  Some after two.  Some will keep going to the bitter end.

Today I met an old friend on her way to get the booster.  She looked really ill.  Nothing I could say would change her mentality so I wished her luck.  The signs of ill health in people who’ve been vaccinated are everywhere and increasing.  Very sad to see but what can we do?
The ‘COVID’ we see and experience, we are convinced, is a Filipino flu called Trangkaso.  The symptoms are identical – in all the little details  We lived there for many years, and our family there are convinced that s0-called ‘COVID ‘ is simply re-branded Trangkaso.  This would stack up with the known background of the pharmaceutical companies trialling their death vaccines there.  Why bother creating new virus’ in laboratories when you can just scoop up one up off the street in Manila and spray that around? 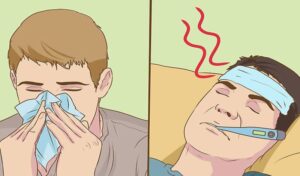 You need a week to ten days to recover from Trangkaso.  That’s why, over in the West they are insisting all with symptoms but who test negative still have to isolate for ten days – to try and stop the virus spreading now in October which the weather is still quite warm and sunny, and people can recover in a week.  The illness will be more deadly in December/January in a cold spell when more and more have been vaxxed, there could be little fresh food available and no warm sun to douse the condition in Vit D.  I sit next to an open window and grab every ray of sun going on warm days and that I am convinced is the best therapy – that plus an infra red lamp at night.
I would recommend getting Trangkaso (why bother calling it COVID – a pharmaceutical industry operation) now if you can find a way to catch it.  It won’t be pleasant but you will be far more likely to survive the winter if you do.  High temperature.  Headache.  Chills.  Shakes.  Massive sweats.  Low appetite.  Bitter taste in the mouth.  (drink orange juice).  Followed by weakness in the legs – low oxygen,   And a skin rash as you start to recover (treat with petroleum jelly). Have a back-up store of Ivermectin ready in case you don’t recover as quickly as people normally do.  Vit D.  Vit C.  Zinc.  Selenium.  Quercetin.  NAC.  Apple Pectin Powder.  I would ‘go early’ if you can as it is an infectious pathogen which spreads well where trankaso hasn’t been seen before, much harder to deal with when the light is gone and the dark closes in.
We were helped out by having kids in school who brought it home.  They promptly recovered in 24 hours with no visible longterm effects!  They just needed a good night’s sleep and they were off again  It took me a week of struggle that sent me reeling but I feel much happier now with it behind me rather than in front of me.  As I say, throw fear to one side and catch the beast now!  COVID rebranding is just a way to get you panicking and rushing on their needles.  The needles could seriously wreck you health.  Get the illness itself if I were you, not the fake version from BIG PHARMA which aims to set you up for future profits to be made out of your misery.   Take off those hoods get into big crowds and breath in deeply.  Yes.  Hope to get it if you can.  Now!  It’s no longer a long drawn out ridiculous television drama which ends with millions of deaths from vaccine.  Trangkaso is out there waiting.  Seize the opportunity to survive the natural way.

One Response to “Catch ‘it’ now if you can.”