We – the people of earth – who have been dragged into this war by the DEEP STATE – are out-numbered and LOSING THIS WAR IN SPACE!”

“TTX” is the world’s most poisonous NEURO-TOXIN.

Just a few MICRO grams can cause DEATH. It is more toxic than cyanide.

TTX is made from LIZARD EGGS…

…And thousands of these super-poisonous eggs are bred in ORBIT – aboard a satellite maintained by NASA astronauts….

It’s not just about UFOS…

COSMIC TOP SECRET is the first film ever to reveal the highly dangerous secret experiments and WAR IN SPACE fought against UFOS.

The Material Safety Data Sheet for TTX lists the oral median lethal dose (LD50) for mice as 334 μg MICRO GRAMS per kg. For comparison, the oral LD50 of potassium cyanide for mice is 8.5 mg MILLIGRAM per kg.

Less than 2kg of TTX sprayed into the atmosphere would trigger mass poisoning of entire NATIONS.

TTX can enter the body of a victim by ingestion, injection, or inhalation, it can even kill you by absorption through your skin…

Yes it can be CHEMTRAILED.

TTX cuts the electro-chemical signals between your brain and your body, it stops your lungs from breathing and your heart from beating… Whilst your brain stays perfectly functional, you become the witness to your own body’s shutdown, leading to suffocation and air starvation. You die in silence because your vocal chords no longer function.

Even before Apollo astronauts had supposedly stepped foot on the moon – bright spherical UFOS were filmed from the Apollo Command Module flying in and out of craters on the moon!

One UFO even flew right over an astronauts head during Apollo 17’s mission to the lunar surface.

The official explanation is that it is a piece of styrofoam which exploded and then blew away in the wind – wind – that is – that does NOT exist on the lunar surface because the Moon has hardly no atmosphere!

And that is just the start of a two hour documentary film now streaming on the Enigma Channel.

And it is very clear from NASA’s own cameras that we – the people of earth – who have been dragged into this war by the DEEP STATE – are out-numbered and LOSING THIS WAR IN SPACE!” 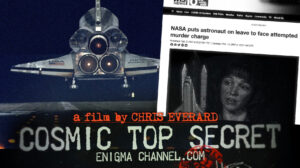