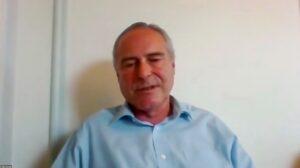 Professor Perrone is one of France’s most highly rated experts in infectious diseases and long-time vaccine policy chief. He is being censored and criticized despite his knowledge in the field of viral diseases and vaccines.

Read his profile via UK Column:

Professor Perronne is Head of the Medical Department at Raymond Poincaré Hospital in Garches, the teaching hospital for the University of Versailles-St Quentin near Paris. He was the University’s Head of Department for Infectious and Tropical Diseases from 1994 onwards but was fired from that position a few months ago. He is a Fellow of France’s biomedical research center of world standing, the Institut Pasteur, from which he graduated in bacteriology and virology and where he served as Deputy Director of the National Reference Centre for Tuberculosis and Mycobacteria until 1998.

He has chaired many top-level health committees, including the French Specialist Committee for Communicable Diseases, and the High Council on Public Health (French acronym: HCSP), which advises the government on public health policy and vaccination policy. He is not anti-vaccine and indeed wrote France’s vaccination policy for many years, as well as presiding over the National Consultation Group on Vaccination, also known as the Technical Committee on Vaccination (CTV).

Professor Perronne was also the Vice-President of the European Advisory Group to the World Health Organisation. At the national level in France, he has chaired the Infectious and Tropical Diseases Teaching College (CMIT), the Infectious Diseases Federation (FFI, which he co-founded), the High Council for Public Hygiene (CSHP), and the National Medical and Healthcare products Safety Agency (ANSM, previously AFSSAPS), which evaluates the health risks of medicines and is France’s sole regulator of biomedical research. Until 2013, he sat on the Scientific Council of the French Microbiology and Infectious Diseases Research Institute (IMMI/INSERM).

Despite Professor Perronne’s extensive knowledge and experience of communicable diseases, vaccines, and vaccine policy at the national and governmental levels in France, he was quickly censored for speaking out on the subject of Covid-19 vaccines, their claimed efficacy, and their identifiable risks. In short, he was professionally sidelined, his reputation was attacked and his professional opinions were censored.

His interview last August with the UK Column has gained more attention after last night’s FDA hearing on the booster shots. Here’s an excerpt from his interview:

Professor Perrone continued by attacking the media on their lies that all the hospitals were full of patients, which is not the case. He said that the “variants” were less and less virulent.

He also shared his view on the use of Ivermectin and hydroxychloroquine as COVID treatment.

“So for hydroxychloroquine, I agree, but unfortunately there are not many randomized studies. But for ivermectin, there were randomized studies, and now it’s been proven. And in India now, it’s spectacular. In the Indian states where they widely used ivermectin, the success was huge, and in the states of India where they didn’t use ivermectin but they were inoculating with this so-called “vaccine”, it was a catastrophe.

If you look at the world news, there’s a woman who was at a high level in the WHO, who’s Indian, and now she’s on trial in India because she said that ivermectin was not useful and was toxic and so on.

To think that ivermectin is toxic is completely stupid: hundreds of millions, maybe billions of people in the world have taken ivermectin for diseases, for filariasis and so on. So it’s a very well-known product. No, it works; it’s completely proven.“