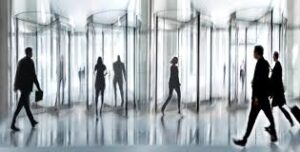 This article was written in 2017 but now we see the full outcome of the revolving doors between pharma and government.

Revolving doors are used to facilitate entry or exit into a building. The trick with using these doors is always to get your timing right. Too fast or too slow and you get stuck.

The analogy seems apposite for a brace of recent announcements of important pharmaceutical industry figures taking over parts of UK operations in key aspects of healthcare planning and delivery.

Andrew Witty, who left the helm of GSK in April, is going to head up the UK government’s  Accelerated Access Review (AAR) programme. The AAR is said to be aimed at helping NHS patients “get quicker access to innovative new diagnostic tools, treatments, and medical technologies.”

Meanwhile Patrick Vallance is leaving his post of head of research and development at GSK as part of a re-shuffle by the new CEO Emma Walmsley. Vallance is taking up a senior position in the UK government, as Chief Scientific Adviser. His job will be “improving the quality and use of scientific evidence in government as head of the Government Office for Science.”

Last but not least, another academic with extensive ties to industry over influenza and pandemic planning (and another ex-employee of GSK, Roche and Aventis Pasteur MSD), Jonathan Van Tam has been appointed Deputy Chief Medical Officer responsible for emergency preparedness and pandemic planning. This is a similarly senior position which holds great power and will potentially involve committing huge quantities of taxpayers’ money to projects preparing for future emergencies, which may or may not come about. It is also a very delicate role as the amount of lobbying and corporate pressure applied on governments before the 2009 influenza pandemic shows.

What are we to make of all this?

The lowering of regulatory and HTA standards is in full swing and its main driver is the pharmaceutical industry. The general rhetoric of rushing drugs and devices through to needy patients willing to accept substantial risk rests on very thin evidence of benefit and unclear public support.

Improving the quality of evidence is desperately needed as shown by the scores of examples of clinical trials that have been abandoned or distorted that have come to light in the last decade. Pandemic planning also requires some rethinking as the millions of pounds spent on a dubious pandemic with equally dubious fixes has shown. The close space of time of these “revolving doors” makes me wonder whether the government has objectively and properly overseen the decision making which has led to such important public positions being filled by senior industry figures. Can one walk away from leading industry, or rubbing shoulders with it, and perform an important public health function with impartiality? HM Government seems to think so, but if you are unsure (as I am) you may be given pause for thought.

A career spent working in pharma usually means a commensurate share and farewell package. We are told that Andrew Witty is also engaged in a venture capital company, so his commercial life is still very much alive. We have not been told whether they have either sold their shares, or put them in a blind trust or in general how they are to behave when advising HM government on interventions such as drugs, biologics, or diagnostics which they helped develop and market.

Professor Van Tam’s track record as an ex-employee of Roche, Aventis Pasteur MSD and SmithKline Beecham (now GSK) has been excluded from the official DH press release, which is interesting, but hardly confidence-building. He frequently attends events organised by the European Scientific Working Group on Influenza (ESWI), a well known industry-funded lobbying group. His predecessor in the CMO post, John Watson, was a founding member of ESWI. Van Tam has been a consistent supporter of pharmacological measures to address influenza and as head of the Pandemic Influenza Office at the UK Health Protection Agency in 2004-2007 bears responsibility for decisions which have been heavily criticised by the Public Accounts Committee. Van Tam went to the department of health from the University of Nottingham, the Chancellor of which is none other than Witty.

In my view it is time that the government and the public took a close look at what is going on in the upper echelons of healthcare planning and delivery in this country and considered imposing a substantial time moratorium on hiring workers with close ties to industry. Should such senior appointments not be subject to parliamentary committee scrutiny?

It’s no consolation but, doors seem to be spinning full time in the USA too, the latest being the appointment of the former boss of Eli Lilly to head the Department of Health and Social Services.

EMA’s imminent move to Amsterdam from London may have been a factor in the UK appointments and may generate more revolving door activity with a rush of regulators unwilling to relocate, or the Government might be trying to reassure industry that it’s still in the driving seat. Another reason for watching events closely.  With so much movement the revolving door will eventually get stuck and cease to work the way it was intended.  What the decision makers seem to have forgotten is that the success of public health depends on the public having full trust and confidence in leadership.

Competing interests: TJ was a recipient of a UK National Institute for Health Research grant for a Cochrane review of neuraminidase inhibitors for influenza. In addition, TJ receives royalties from his books published by Il Pensiero Scientifico Editore, Rome and Blackwells. TJ is occasionally interviewed by market research companies about phase I or II pharmaceutical products. In 2011-13, TJ acted as an expert witness in litigation related to the antiviral oseltamivir, in two litigation cases on potential vaccine-related damage and in a labour case on influenza vaccines in healthcare workers in Canada. He has acted as a consultant for Roche (1997-99), GSK (2001-2), Sanofi-Synthelabo (2003), and IMS Health (2013).In 2014 he was retained as a scientific adviser to a legal team acting on oseltamivir. TJ has a potential financial conflict of interest in the drug oseltamivir. In 2014-16, TJ was a member of three advisory boards for Boerhinger Ingelheim. He is holder of a Cochrane Methods Innovations Fund grant to develop guidance on the use of regulatory data in Cochrane reviews. TJ was a member of an independent data monitoring committee for a Sanofi Pasteur clinical trial on an influenza vaccine. Between 1994 and 2013, TJ was the coordinator of the Cochrane Vaccines Field. TJ is a co-signatory of the Nordic Cochrane Centre Complaint to the European Medicines Agency (EMA) over maladministration at the EMA in relation to the investigation of alleged harms of HPV vaccines and consequent complaints to the European Ombudsman. TJ is co-holder of a John and Laura Arnold Foundation grant for development of a RIAT support centre (2017-2020) and Jean Monnet Network Grant, 2017-2020 for The Jean Monnet Health Law and Policy Network