Ticket sales for events in the UK that could require vaccine passports are “flatlining” according to industry insiders, as the rebellion against the onerous system grows.

The government has asserted that it will continue to pursue the policy despite multiple warnings that it will create a two tier society and put countless venues out of business.

From the end of the month, people seeking to enter a nightclub in the UK will have to prove that they have been double jabbed.

Proof of a negative test will no longer be accepted despite the fact that vaccinated people can still carry and pass on the virus.

With nightclubs operating at a net profit margin of 15 per cent, and with around 25 per cent of young adults in the UK remaining unvaccinated, the industry faces potential financial ruin.

The scheme is also expected to cover all venues where crowds of over 500 people gather, which includes some of London’s larger west end theatres.

“There is a significant proportion of people who don’t want to use passports or are not vaccinated. It has settled at 20 per cent in France. We expect something similar here,” said Kate Nicholls, the chief executive of Hospitality UK.

Nicholls noted that with the industry already struggling desperately as a result of lockdowns, the administrative costs combined with the loss of income as a result of people staying away will deliver “a further nail in the coffin of returning for many venues.”

According to Michael Kill, of the Night Time Industries Association, ticket sales for events at the end of September and beyond are already “flatlining.”

“We are seeing a lot of pushback from people who don’t want to come and have to show their health status on entry,” he told the Telegraph.

Plans to introduce the passports are also going ahead despite Israel, which was the first major country to launch a similar scheme, now experiencing its highest COVID wave since the start of the pandemic.

Numerous major European countries have also been rocked by weeks of protests and rioting against the measures, while many businesses in France have simply stopped enforcing them.

As we highlighted earlier, the BBC is already reporting that vaccine passports are going to be rolled out with no mention of the fact that in a democratic society, such a scheme would require a Parliamentary vote. 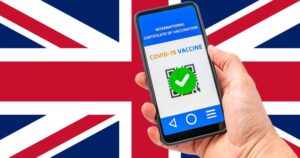