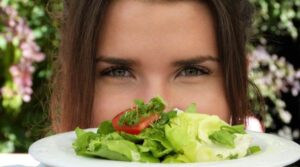 They Are Trying to Sneak mRNA Vaccines Into Your Salad

Once upon a time you needed to get injected in order to receive a vaccine. Then nasal spray vaccines hit the market back in 2003, making people a little less hesitant, since it did not involve a needle in the arm. Either way, a person knew that they were receiving a vaccination of some sort, and could not be easily tricked into getting vaccinated against their will. This is starting to change with the new mRNA Covid vaccines (actually gene therapy), as there appears to be some kind of “second hand vaccination” (or shedding) going on, whereby unvaccinated people are getting the same symptoms (aka side effects) as vaccinated people. However, getting “vaccines” into people could soon become much, much easier.

Researchers at the University of California-Riverside have been a $500,000 grant from the National Science Foundation to develop lettuce and spinach that can deliver mRNA vaccines to whoever consumes the leafy greens.

(StudyFinds.org) – Vaccinations can be a controversial subject for many people, especially when it comes to injections. So what if you could replace your next shot with a salad instead? Researchers at the University of California-Riverside are working on a way to grow edible plants that carry the same medication as an mRNA vaccine.

The COVID-19 vaccine is one of the many inoculations which use messenger RNA (mRNA) technology to defeat viruses. They work by teaching cells from the immune system to recognize and attack a certain infectious disease. Unfortunately, mRNA vaccines have to stay in cold storage until use or they lose stability. The UC-Riverside team says if they’re successful, the public could eat plant-based mRNA vaccines — which could also survive at room temperature.

Thanks to a $500,000 grant from the National Science Foundation, researchers are now looking to accomplish three goals. First, the team will try to successfully deliver DNA containing mRNA vaccines into plant cells, where they can replicate. Next, the study authors want to show that plants can actually produce enough mRNA to replace a traditional injection. Finally, the team will need to determine the right dosage people will need to eat to properly replace vaccinations.

How much do you want to bet that the plan is to sneak these tainted plants into salad bars and supermarkets around the country? What better way to get mRNA technology into health-conscious and “vaccine hesitant” people?

“Ideally, a single plant would produce enough mRNA to vaccinate a single person,” says Juan Pablo Giraldo, an associate professor in UCR’s Department of Botany and Plant Sciences, in a university release. “We are testing this approach with spinach and lettuce and have long-term goals of people growing it in their own gardens,” Giraldo adds. “Farmers could also eventually grow entire fields of it.”

You can read the rest of the report if you are interested in how they are using nanotechnology to use chloroplasts to express foreign genes. We already have GMO frankenfood, but this is taking it to another level.