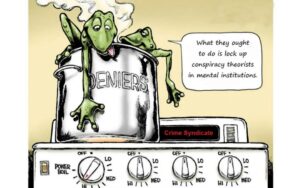 Mike Stone — Masses are Complicit in their Own Demise

(MSM) is a hot tub for conspiracy deniers)

There’s no sense of urgency among Americans.

No one seems to grasp what’s really going on.

“Americans are not only oblivious to their own destruction, they’re actually complicit in it. That’s the irony. The entire hoax would stop instantly if everyone just took off their mask. But they won’t do it. They’d rather submit to slavery, lose limbs to amputation or lose their lives from blood clots, they’d rather condemn their souls to hell, than face reality.”

Like frogs being slow-boiled in a pot, Americans are oblivious to their own impending destruction. The only difference is the frogs are smarter. Turn up the heat too fast and the frog will catch on and hop right out of the pot. Americans have had the heat turned up scorching hot for the last two years, yet they remain utterly clueless.

The girl at the bank asks me how I am. I tell her, “I’m okay, under the circumstances.”

“What circumstances?” she asks. “The virus hoax,” I say.

She stares back at me with vacant eyes. I’ve seen that look a million times over the last year. The fluoride stare, delivered over a face diaper.

She gives a little laugh and lowers her head. Our conversation is over. She finishes processing my deposit and I leave.

A friend asks me to join him on a trip to Las Vegas to watch the Raiders football game.

“First of all,” I tell him, “they won’t let me in, because I’m not vaxxed. Second of all, are you sure you want to go to a football game with everything that’s happening in the world?”

He snorts and says, “I’m not going to let those liberals make me change my life.”

Liberals? Does he even have a clue what’s going on? This isn’t about liberals or conservatives, Democrats or Republicans, it’s about the complete overthrow of the country. It’s about Communist mass murder and the enslavement of society. Liberals?

Millions of Americans share my friend’s attitude. On some level, they understand that the Presidential election and the California recall election were both rigged. Yet they refuse to believe it’s anything more than politics as usual.

The fake conservatives on Fox News and talk radio have convinced them that’s all it is. There’s no sense of urgency among Americans. No one seems to grasp what’s really going on.

Like my friend who wants to watch the team he rooted for as a boy, I’ve noticed peoples’ desire to revert back to their childhood. My stupid sister talks endlessly about going to Disneyland again next summer because “it’s what we’ve always done.” She wants to evade reality by reverting to her childhood.

Another friend entered a bodybuilding competition for the first time. To his credit, he won his weight class. But why? What’s the point of winning a trophy when 70% of the world’s population is targeted for destruction?

Another friend wants to update an old script we worked on together and send it out. But why? I try telling him that the industry is infested with Communist scum and that, at the top, some have literally sold their souls to Satan. He bursts out laughing and calls me crazy. I offer to send him evidence, but he doesn’t want to see it. He wants to be a child again, watching his heroes on the big screen.

I get that people have goals and dreams and whatnot, but the world we once knew is gone. We’re at war now. The old rules and ways of life no longer apply when you’re in a fight for survival. Why am I seemingly the only person in my circle who understands this? Maybe they’re the ones behaving rationally and I’m not.

Today I received an email from a fully vaxxed friend who tells me he’s getting both a flu shot and a COVID booster shot this week. I try talking sense to him, but it goes in one ear and out the other. Like my writer friend, all he wants to do is watch old videos from his childhood. If he’s alive by this time next year, I’ll be shocked. In fact, I doubt if he makes it to Christmas.

The sidewalks swarm with hundreds of people wearing a submission diaper. There’s a high school down the street and I observe girls cruising boys, and boys cruising girls. The ones who aren’t cruising are glued to their phones. The adults scurry to and from work. The homeless lie in their tents. People in LA and across America are going about their business as if nothing is different, nothing has changed as long as they wear a mask and take two jabs. No one knows the truth and no one wants to know.

Americans are not only oblivious to their own destruction, they’re actually complicit in it. That’s the irony. The entire hoax would stop instantly if everyone just took off their mask. But they won’t do it. They’d rather submit to slavery, lose limbs to amputation or lose their lives from blood clots, they’d rather condemn their souls to hell, than face reality. They’re oblivious to their own destruction.

3 Responses to “The Masses Are Complicit In Their Own Demise”