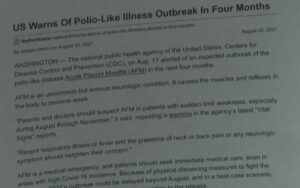 I wonder how ‘they’ know its going to outbreak in 4 months…. Jason Liosatos.

Already seen a video of one lovely young woman in Australia, suffering from these symptoms soon after the jib !

Shots are getting more dangerous as the ingredients are continually changing.  Average age of polio-like disease will be five years old.  There is no cure, only therapy.

Only 60% recover.  The rest have paralysis for life.

Polio-type illness started being reported in 2014 and has been growing ever since.

They started this illness in the Philippines in 2001 injecting polio into people in vaccines.  It was launched in the USA in 2014.  Via the flu shot.

This year there will be a big push on the flu vaccine for five years old plus.  Guillaume Barre Syndrome used to be called Polio.  Hospitals are now being told to call it Acute Myelitis.

If COVID shot is authorised for 5 to 11 year olds (as could be coming), this will increase the numbers of paralysed children.

The Polio shot is also a possible source of this coming outbreak.

People can catch this from vaccinated people.