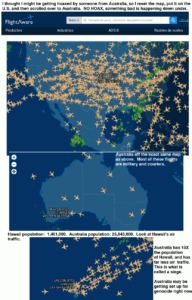 It is SO BAD that Americans trapped in Australia cannot even go to the embassy and even if they could, even the embassy cannot arrange a way for Americans to fly out.

Earlier today I reported that the USPS and now confirmed other mail carriers are no longer delivering to Australia. Anything addressed to Australia is being sent back “return to sender”. If Australia had a legit plague going on, why would they block incoming deliveries? Answer: There is no plague, Australia is being set up for genocide. Genocide is the only conceivable reason to block all INBOUND deliveries that would be needed to support a population in trouble. The government wants supplies to dwindle to zero without replacement. That air traffic map makes this perfectly clear.

LOOK AGAIN AT THAT AIR MAP. THAT IS WHAT A GUN BAN LOOKS LIKE.

12 Responses to “NOT RUMOR: ALL COMMUTER FLIGHTS IN AUSTRALIA GROUNDED”