ER Editor: Another military coup? More voting irregularities and/or ‘(s)elected’ leaders who won’t go away because certain globalists are backing them?

In our opinion, the situation in Guinea, of a military coup, smacks of the problem in Myanmar, and in the US with the notorious voter fraud of last November’s election. In the Myanmar situation, George Soros had had a known presence in the country for years, whose NGOs were behind globalist presidential choice Aung San Suu Kyi. An election was also held in November 2020; it was believed to be rigged in the same way as the American one using voting machines. Soros’ NGOs had their bank accounts frozen; Suu Kyi was arrested and put on trial.

Myanmar is also the major country of the Golden Triangle, so like Afghanistan, which is the centre of the Golden Crescent, more than just a corrupt government may be at stake for these two countries. Perhaps both have been about kicking out the globalists or, as others would term them, the ‘cabal’,

Guinean special forces seized power in a coup, arrested the president, and promised to change the political makeup of the West African country.

The new military leaders announced a nationwide curfew “until further notice”, saying it would convene President Alpha Conde’s cabinet ministers and other senior politicians at 11am (11:00 GMT) on Monday.

The nation of 13 million people – one of the world’s poorest countries despite boasting significant mineral resources – has long been beset by political instability.

One Western diplomat in Conakry, who declined to be named, suggested the unrest may have started after the dismissal of a senior commander in the special forces – provoking some of its highly trained members to rebel.

Youssouf Bah, a journalist based in Conakry, said members of the special forces told him: “This is not a military coup. We are here to free the people.”

Is it too far of a stretch to suppose that Soros has been propping up Condé by any means possible? Including rigging the country’s elections?

The report below is informative, but misses the Soros connection.

A recent coup in Guinea has left the world surprised and unanswered about what is really happening in the region.

The military overthrew the president and seized power after some controversies involving alleged attempts by the former leader to perpetuate himself in power. Regardless of political factors on the domestic scene, the coup appears to have great international relevance, as it strongly harms Russian interests in Guinea. 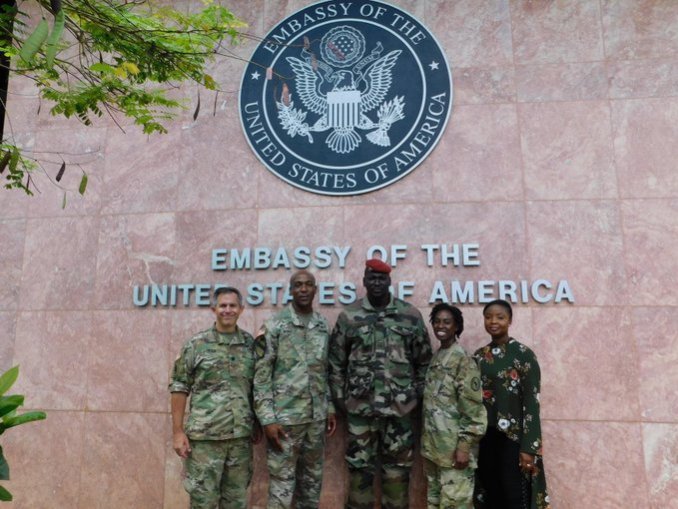 Colonel Mamadi Doumbouya along with US Africa Command soldiers

On Sunday, Guinea’s armed forces arrested the country’s then president, Alpha Conde, and announced the dissolution of the government. According to witnesses, during the president’s detention, at least two people were injured in an intense firefight in and around the presidential palace, located in Conakry, the country’s capital. The military official who led the coup was Colonel Mamadi Doumbouya, who, in statements to the local media, said that there will be a major reform in the country, with the formation of a new government, promulgation of a new constitution and beginning of a military administration.

Doumbouya heads a dissident military group that calls itself the “National Committee of Reconciliation and Development” (CNRD, in its French acronym). So far, little is known about such organization, which appears to have been formed a few days before the coup and does not seem to have a formal ideology or agenda to be defended, just joining soldiers dissatisfied with Conde’s government. The CNRD released videos proving that the former president is alive and safe, but there is still not enough information to affirm the conditions under which he is being treated.

To understand the case, we must pay attention to the background of the coup. Alpha Conde was elected for a third presidential term in October 2020 and was declared president the following month, in November. The opposition claimed fraud during the elections and initiated a crisis of legitimacy. The point most criticized by his opponents was Conde’s decision to amend the constitution so that he could be perpetuated in power. Guinea’s constitution forbade a president to run for office three times in a row, but Conde made a change in the legal text in order to be able to run and defeat his opponents. Despite being a complicated and controversial legal maneuver, Conde gained strong popular support and his permanence in power was the preference of most of the Guinea’s people, according to surveys carried out at the time.

On the other hand, the leader of the coup, Colonel Doumbouya, was until then a rather obscure figure to the national political scenario. Doumbouya is a former member of the French Foreign Legion, having served in military operations in Afghanistan and African countries. He received military training in Israel before returning to his country and assuming command of the special forces. There are photos circulating on the internet showing Doumbouya along with US Africa Command soldiers at the US embassy in Guinea – the circumstances are unknown but reveal some degree of connection between military dissidents and foreign agents.

The reason that explains why the strong opposition occurred between Condé and Doumbouya may be precisely in their foreign connections. Guinea is one of the largest aluminum and bauxite suppliers in the world. The coup strongly impacted the metals industry, which reached record highs in the price of aluminum. And one of the main aluminum and bauxite explorers in Guinea is the Russian company Rusal, which has been operating in the country for two decades and is responsible for managing several local firms and industries.

Obviously, there wasn’t a coup d’état just to stop Rusal’s actions in Guinea. The tension is due to the level of collaboration between the African country and Russia. Conde was interested in taking advantage of the partnership in the aluminum and bauxite business to increase economic cooperation and seek more Russian investments in Guinea. In June of this year, Conde sent a delegation of officials to Russia, during the 24th St. Petersburg International Economic Forum, with the intention of starting a bilateral dialogue to attract more investment in Guinea, mainly in the infrastructure sector, which is a strategic point for the implementation of national development policies. In fact, Conde saw Russia as an opportunity for strategic international cooperation between two emerging nations, just as other African countries have seen in China, for example.

Certainly, no Western country will publicly support the coup, but the unstable situation in national politics will already be enough to prevent Russian investments in Guinea, so Guinea has been “neutralized” in this regard. Perhaps, in addition to Latin America, Africa is also in Washington’s plans since the US has lost strength in Asia. If this is confirmed, it is possible that in the near future we will see new coups taking place in other African states.

Lucas Leiroz is a research fellow in international law at the Federal University of Rio de Janeiro.