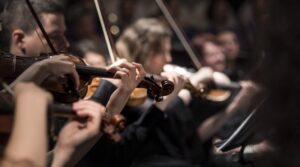 English Touring Opera Fires Half Its Orchestra for Being White

We’re living in a world where you can lose your job just because you are White, but somehow this is not considered racism.

English Touring Opera (ETO) has dropped half of its orchestral players in a push for diversity. At least 14 musicians have been told they will not be booked for the 2022 ETO tour, many of them long-running members of the orchestra. The ETO has attributed the changes to prioritising “increased diversity in the orchestra,” something that’s in line with “firm guidance of the Arts Council.”

“Increased diversity” is just a euphemism for less White people. Since everyone is pushing for “increased diversity” now, it really just means there are very few places that White people will be able to find any work. This is happening all the time now, across almost every sector, but there is little to no uproar about destroying people’s livelihoods based solely on their race. It’s supposedly “racist” to oppose anti-White racism.

At least the Musicians Union is sticking up for the musicians who are out of work due to the “diversity” push. The MU wrote in a statement:

There has been an understandable outcry from Musicians Union members in response to this news today. It comes at an especially devastating time for the freelance community, and musicians in general, with so many struggling with little work and income during the COVID-19 crisis… while the MU lauds efforts to increase diversity in the workplace, the Union is adamant this should be achieved fairly and legitimately, not by ‘sacking’ half an orchestra.”

Any time you have affirmative action hiring, there is no fairness to be found. There is only race-based discrimination, with White people being unfairly denied gainful employment. How can people not understand that it’s wrong to impoverish White people?

The Arts Council, who was cited as an inspiration by the English Touring Opera, quickly tried to distance themselves from the scandalous sacking. They stated that they did not advise the ETO to fire their musicians in order to increase diversity in classical music.

We did not instruct the English Touring Opera to send this letter. We are now in conversation with ETO to ensure no funding criteria have been breached.”

The ETO announced hiring 12 new artists for their orchestra for the spring 2022 tour, but the article has since been taken down, likely due to the controversy they have caused. Hopefully people will learn about the ETO’s anti-White actions and refuse to support their racism by boycotting their events.

Although this might seem like a small story, this is how White genocide is unfolding in everyday life. White people are denied employment simply for being White. It must be stopped.