George Orwell’s famous novel, 1984, is a masterful fictional account of a state which imposes cognitive dissonance on its citizens to control their perception of reality. It is summed up in the statement, “War is Peace; Freedom is slavery; Ignorance is strength.” The story of this book, Manifest Destiny, is an account of how agencies of US intelligence including the CIA and State Department, in collaboration with private “democracy” NGOs, developed and refined techniques of Orwellian doublethink or cognitive dissonance to create a series of regime changes around the world that sounded noble, democratic, but in reality were not.

William Engdahl describes the background beginning in the 1980’s with Reagan’s CIA Director leading to creation of a series of private NGO’s to covertly manipulate aspirations for freedom and democracy from Poland and other communist countries in the late 1980’s, to the Soviet Union to Yugoslavia and China. The book details the refinement of what came to be called Color Revolutions by the early years of this century in Ukraine, Georgia and later with the US-orchestrated Arab Spring. It’s an account of how elite circles in the USA and Europe along with their think tanks refined methods to impose a new tyranny on countries from Ukraine to Egypt to Libya and beyond. The aim was to use democratic aspirations of ordinary people, often youth, to topple regimes resisting what David Rockefeller once called a One World Government, a global corporate tyranny. This is an almost incredible chronicle of how select NGOS speak about freedom, human rights, democracy in order to bring war, violence and terror. The book is a must read for anyone wanting to truly understand world events of the past three decades or more. 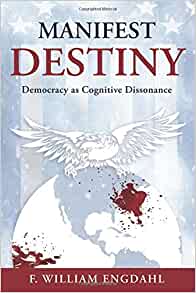 TAP – President Marcos of the Philippines tried to stand in their way refusing to sign away the wealth of his country to the Wall St banks.  The CIA launched People Power on EDSA to topple him, and brought in the Acquinos who signed away everything the banks wanted.  The Acquinos have been billed as super saintly not corrupt ever since in the media, and Marcos who raised educational standards and built infrastructure across the country to lift living standards of millions of poor was blackwashed ever since in the world’s media.

President  Ramon Magsaysay refused the corrupt offerings of the Wall St banks before Marcos was (s)elected, and he died in an air crash.  Today’s President Duterte does what he can to slow the advance of the One World Government programme, but his failures to stop corporate price rises is blamed entirely on him by the people.  He complies, but does so slowly and in a muddled manner buying the country time.  If the people (election rigging machinery now also in use in the USA) throw him and his daughter out in the next election and bring back the Yellows, they will accelerate the programme of vaccine death and the country’s economic destruction.  Things are bad under Duterte but believe me, they can be a helluva lot worse.  Sadly nearly all my friends there believe the output of the media and think vaccines will save their lives, when those bioweapons are the main threat they face.

Engdahl’s book looks like a great read.  I’ll be buying one.  It says on Amazon there are some free copies.