I am neither a Jew baiter nor an exponent of ‘White Power’, and I despise so-called ‘neo-Nazism’.  However I do get terribly frustrated with the utterly insane position, otherwise decent and sensible Christians take regarding the State Of Israel, the Jewish people and their religion.  I have heard every argument known to man; with all of them either missining the point genetically, i.e. over DNA, theologically, i.e. with a warped view of eschatology and basic Christian doctrine, or just in terms of political reality.

To debate with a Christian Zionist is akin to attempting to debate with the closed minded of a deeply sincere yet equally deeply deluded Leftist.  Barriers go up and emotional rhetoric replaces clear thought and reason, much to the detriment of Christ and His Kingdom, as well as to the spiritual position of the poor soul who has been brainwashed by this cynical and deliberate perversion of scripture.  That is why I felt lead by God to grasp this thorny issue and tear down this thorny issue and tear down the wall of cowardly silence once and for all – no matter what criticism I may have to endure for so doing.

Christian Zionism is grounded on the interpretation of the Bible that supports the ingathering of all Jews to Israel and their exclusive claim to the whole land of Palestine.  Based on the gift of the land to Abraham and the Jewish people as the Chosen People, it sees the establishment of the state of Israel, the rebuilding of the Third Temple, the rise of the AntiChrist and the build-up of armies poised to attack Israel as among the signs leading to Armageddon and the Return Of Jesus…

The problem for the mega-rich TV evangelicals and their Zionist backers is that their claims can only be believed by people with a stunning ignorance of the Bible……The crucial part of the New Testament makes it clear that, from the time the Jews broke the Covenant and rejected Jesus, the true Israel has been a spiritual entity.

Hence the true Israel of our times and of all times, is not the Jews, with their adherence to their viciously anti-Christian Talmud, but the faithful followers of His Church.  The true Israel for two thousand years has been based not on Jewish bloodlines but on faith in Christ…

Far from being the older brother of Christianity, the religious faith of modern Israel – being based on the Talmud – features the most disgusting blasphemies against Christ, who it calls the ‘hanged one’.  This apparently religious tome gleefully lists the vile punishments it says Jesus now endures in Hell, including boiling in excrement.

Despite this anti-Christian hatred, and virulent racism of those running the Israeli state, many Christian Zionists often claim that Americans and Britons for that matter, are obligated to back the policies of its government, or harm will come to them and our countries.  They hijack Genesis 12:3 to support this pseudo-religious protection racket: ‘I will bless those who bless you, and  him who curse you I will curse.’

To … huge electoral clout is added the power of the Zionist lobby, the influnce of the overwhelmingly Jewish-owned mass media, and the control of many top politicians through pressure such as the video files of the Mossad-created Epstein paedophile honey trap.

Extracts from CHAPTER 7, The Dispensationalist Heresy, Deus Vult – The Great Reset Resistance by Knights Templar Order.  Sold by The English Democrats for £25. 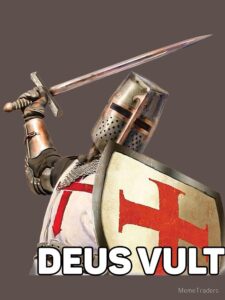 3 Responses to “Christian Zionists are a contradiction in terms”