The Satanists are running amok.  A massacre is taking place and most ordinary people are complying….. 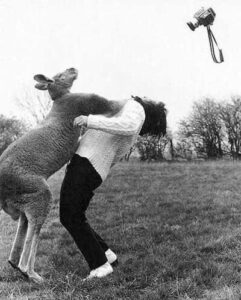 The blood of Australians must be boiling with this cocksure Satanist telling them all they’re being consigned back to convict days.

A bit of traditional combat skill needs to be called on.  This ‘roo seems to have the idea.  Those evil murderous eyes in the video are the perfect target.

The people have a right of self defence.  It should be exercised.  War has been openly declared.