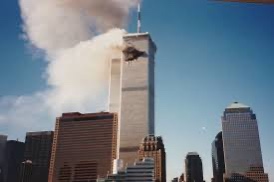 Well the anniversary of that fateful day is almost upon us and I believe it’s beyond time to demolish (whoops!) some of the lunatic conspiracy theories swirling around despite the detailed reports provided the various Government agencies. I’ll do this by recounting the actions of the key players on that momentous occasion.

Having overpowered the flight crews they thanked Allah for the decision by Rumsfeldt and Cheney to stand down the country’s air defense systems which enabled them to crash the planes into the Pentagon and two WTC buildings. Talmudic Rabbi and Pentagon Financial Controller Dov Zakheim sat with furrowed brow wrestling with the problem of the three trillion dollars that went missing under his watch. Though deeply worried he nonetheless took consolation from the great work being performed by the special audit group working at the other side of the Pentagon. “I hope nothing happens to them or we’ll never find out what happened to the three trillion” he muttered under his breath. Just then he heard the explosion and learned to his horror that the Pentagon and two WTC skyscrapers had been hit by hijacked airliners. On hearing the news he was heard to cry out “if only I had downloaded my company’s  Command Transmitter System I could have taken control of the planes and saved our country” adding hastily “by which of course I mean America”.

In his office at the President’s National Security Advisory Board Dr. Philip Zelikow (speciality: moulding public opinion) was putting the final touches to a document entitled  Draft Report of the National Commission on Terrorist Attacks Upon the United States when an aide burst into his office. “Dr. Zelikow, the Pentagon has been his by a hijacked aircraft”. “And….” the aide continued “two buildings at the World Trade Center have been hit as well”. At which point Zelikow leapt to his feet shouting “what do mean two buildings, surely three?”. Pausing only to press the Delete File icon on his computer he left the office, yelling at the aide “get me Silverstein on the phone”.

Later that day Larry Silverstein, for it was he, ruminated on his remarkable personal good fortune in insuring the WTC buildings (rendered almost worthless due to an enormous asbestos removal requirement) for billions just weeks before, in particular the clause insuring against terrorist airborne attack. He also reflected on how he and his family had had breakfast at the top of the WTC every morning but on this one day none of them, for different reason, were present. “Surely” he mused, “this confirms that we are Yahweh’s Chosen People”. Just then his attention was drawn to an on-site BBC reporter who had just announced the collapse of WTC 7, despite its being clearly visible in the background. “This wasn’t supposed to be pulled for another twenty minutes” he fumed. “What the hell is going on?”

Now some have questioned how terrorists unable to fly Cessnas were able to achieve what they did, manoeuvres deemed impossible by experience 7474 pilots. But you must remember that these hijackers were extraordinary people. They also outwitted the Israeli airline security specialists and, most remarkable of all, seven of them survived the conflagration and now live happily in various Arab countries, none the worse for wear.

The foregoing offers all the proof you need in support of the official Government version of the attacks. But I’ll give you more. Two days after the attacks the FBI discovered in Dulles Airport a car used by one of the hijackers and in it they found…….a flight manual for the Boeing 747. It gets better. In the smouldering wreckage of the buildings the FBI found a still intact passport for one of the hijackers. If all of that doesn’t convince you then, quite honestly, nothing will. You are indeed the deranged tinfoil hat-wearing conspiracy theorist you’re seen to be by all intelligent well-informed people.