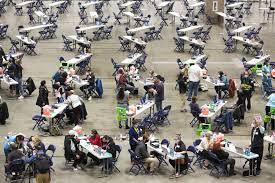 On Thursday, the US High Court breached the Nuremberg Code voluntary consent mandate on all things health related — the US Constitution as well on this issue under its Supremacy Clause.

It opposed the “constitutional right to bodily integrity, autonomy, and of medical treatment choice in the context of (an unconstitutional flu/covid jabbing) mandate” — what Indiana Univ. (IU) students asked the court to ban.

Like hundreds of other US colleges and universities, IU requires “students, faculty and staff (to be) fully (jabbed for flu/covid) or have an approved exemption before returning to campus.”

Ignored is that jabs have nothing to do with protecting health from seasonal flu-renamed covid.

They have everything to do with advancing state-sponsored tyranny and depopulation on an unparalleled scale.

IU, my own alma mater, and hundreds of other US colleges and universities support medical tyranny.

Their mandates made higher education at their institutions hazardous to health by requiring everyone on campus to be jabbed with experimental, high-risk jabs designed to irreversibly harm what’s too precious to lose when taken as directed.

On Thursday, right-wing ideologue justice Amy Barrett sided with IU and Pharma — without involving other justices to weigh in on this most cutting-edge issue of our time.

Her refusal to address this issue followed two lower court rulings for IU and Pharma against public health as it should be.

They showed contempt for the right to health, well-being and public safety.

Students at IU and other schools with similar draconian mandates will be barred from campus and classrooms unless jabbed with health-destroying toxins.

Faculty and staff unwilling to sacrifice their health will be fired.

“Equal Justice Under Law” words that adorn the Supreme Court’s west facade defy its history of supporting powerful interests over the general welfare.

The same goes for its “Justice, the Guardian of Liberty” motto.

From inception, the US was always ruled by figures who lie, connive, misinterpret and pretty much do what they please for their own self-interest and powerful constituents.

The notion of “government of the people, by the people and for the people” flies in the face power brokers serving privileged interests at the expense of governance as it should be.

It denied a Trump challenge by refusing to rule on brazen fraud in Arizona, Georgia, Michigan, Pennsylvania and Wisconsin.

In upholding Obamacare over healthcare as it should be (2012), the High Court gave Pharma and other industry giants a big win by supporting what Ralph Nader called “a pay-or-die system that’s the disgrace of the Western world.”

Americans pay double or more what it costs consumers in other developed countries for healthcare — so Pharma and other industry giants can cash in big at the expense of what’s increasingly unaffordable for growing millions in the US.

In Zucht v. King (1922), the High Court ruled that unvaxxed individuals could be denied admittance to classrooms.

In Prince v. Massachusetts (1944), the Supreme Court held that states may require vaxxing — regardless of objections for religious reasons.

All things flu/covid is unique in US history.

As explained above, it has nothing to do with protecting public health.

It’s all about destroying it.

Yet the High Court virtually endorsed diabolical social control and depopulation by refusing to address this most cutting-edge of all issues.

Jabs should “be tested against a true placebo” — not flu/covid ones.

They should undergo thorough/longterm testing with volunteers from all age groups — “to properly track adverse events.”

Jabs “should be free of mercury, aluminum…other nano-metals,” and all other toxins they routinely contain.

They “should be free of adjuvants proven to be dangerous, including but not limited to squalene, aluminum, and PEG (polyethylene glycol).”

They “should be free of avian, bovine, porcine, monkey, and mouse viruses.”

They “should be free of human DNA and aborted fetal tissue.”

They “should be free of RFID bio-chips and nano technology agents.”

Flu/covid jabs fail all the above safety standards. They should be banned, not OK’d for human use.

Under the 2005 Public Readiness and Emergency Preparedness Act (PREPA), US drug companies are exempt from liability for their hazardous vaccines.

Pfizer/Moderna mRNA drugs are exempt even though they’re not vaccines.

In Bruesewitz v. Wyeth (2011), the Supreme Court ruled for protecting Pharma from state tort liability lawsuits that seek damages for injuries or death attributed to use of vaccines.

Experimental flu/covid jabs have known and unknown hazards, the latter because of their rushed/inadequate testing.

Development of vaccines takes from around 6 – 12 years. The vast majority of tested ones fail and are discarded.

Everyone jabbed with Pfizer/Moderna mRNA drugs or J & J/AstraZeneca vaccines is a guinea pig for Pharma — playing Russian roulette with their health.

This unprecedented human experiment already turned out badly  — countless millions in the West and elsewhere harmed.

By failing to address and halt this health-destroying experiment, the US Supreme Court is complicit in irreversibly harming the health of everyone jabbed.

In my 9th decade, never did I ever imagine anything approaching what’s going on now.

Yet state-sponsored, media supported war on public health continues with nothing in prospect to halt what US/Western dark forces want destroyed.