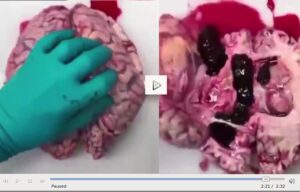 Their microscope blood resuts were EXACTLY the same as the German doctors. AND THEN:

A doctor’s rebellion happened in France and they started doing autopsies, ( even though like everywhere else, they were told to not do autopsies and only cremate the remains without examination.) This was never spoken of in America’s MSM. During the autopsies of those dead from the pfizer shot, they noticed that every single time someone died, the brain was full of clots. They were so sure of their results that they were able to cut open the next brain of someone murdered by the shot, and there were the clots as expected. They show this at 2:15

8 Responses to “The German doctor video was accurate, NOW WE HAVE THIS from France:”