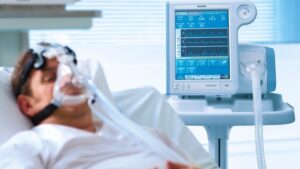 Police roaming the streets in Australia enforcing medical martial law, arresting senior citizens for not wearing masks, threatening a young mother in her home in front of her children for posting something on Facebook about a protest – these are all images that have been coming out of Australia in recent days where some are saying that Australia has now become a medical police state.

A very disturbing video posted by a woman on Instagram who claims to be from Sydney, Australia, reports that a young man who was taken to an unnamed hospital in Sydney for pneumonia, and had tested negative for COVID-19, was forced to receive COVID standard protocol treatments anyway against his will, which resulted in him going into an induced coma where his heart stopped beating for several minutes and he was declared dead, a “COVID death.”

She allegedly spoke to this young man who survived the coma, and reports the following.

But because he was having so much difficulty breathing, he was rushed on to one of those respirators. And then because he said that wasn’t helping, they actually put him into an induced coma.

After he was in an induced coma for three days, he woke up in ICU following that. He was then moved to the COVID ward.

He noticed some really strange behavior from the nurses. They were being very “shifty.” He was being asked to take some medicines he did not understand why he had to take. He was being treated as a COVID patient, when he did not have that.

After a few days he was feeling better and wanted to go out of his room to see what was happening outside, because he had heard some rumors from others.

He reportedly stated that when he opened his door, what he saw “looked like a movie.” He said there were people on the floor, people were being restrained by nurses and police to receive treatment for COVID-19, and people were screaming “I don’t have it! I tested negative.”

Some of the people were allegedly being carried off to a psyche ward after making these claims.

Watch the video to hear everything Maria reported. This is from our Rumble channel, but should be up on Bitchute soon as well.

Here in the U.S., a friend of mine whom I have known for years sent me the following email a couple of days ago.

I can hardly believe I am writing this, but as I am about to head to [another state] to bury my younger brother, I need to face it.

COVID protocols killed my brother and I have such a mix of emotions – mostly anger at the system and how they are killing people – and sadness, shock and disbelief that my brother is actually really gone.

He died last week, but I have been in too much shock to even write to you about it, but since I am headed there now, I needed to tell you.

My brother got “COVID” a few weeks ago. My niece (who shares an apartment) actually had it first, but recovered using the vitamin protocol and Ivermectin. My brother was helping to take care of her.

Then he got sick, but it really hit his GI system and he had bad diarrhea and vomiting and after 2 days got really dehydrated.

My older sister (who also shared the apartment) rushed him to the local ER where they promptly gave him fluid iv’s.

I begged them not to put him on a ventilator, to try HCQ, Ivermectin, VIT C IV… but “none of those are FDA approved or protocol.”

I pleaded to deaf and dumb ears.

They even admitted that not one patient who went on the ventilator came off of it! They knew they were killing him!

But they said “he would die” without going on it.

I asked… what do you have to lose by trying some of these other therapies that have been proven to work by many doctors here in the US and abroad?

But they would not budge. Their damn protocols killed my brother!

He went in for IVC fluids, and ended up on their ventilator – that no one comes off – all because their protocols are killing people and they are too blinded to see it – or just don’t care!

I just don’t know! All I know is my brother knew this was a plandemic, he didn’t “mask up” and did not take the vaccine. Many of the people that will be at his funeral will say “if only he had taken the vaccine…”

I say, if only the hospitals would actually care about using the modalities that are healing people and not stick to their eugenics protocols of killing people!

He died a few days after his 49th birthday. He had no pre-existing health conditions, other than an ulcer.

If only I had been there to help make sure he stayed hydrated and took all the right vitamins. If only the FDA wasn’t an evil drug-pushing death organization. If only hospitals really healed people.

Many “if onlys” but one “if only” I don’t have is saying “if only he knew Jesus” because he did know Jesus, and that is the ONLY comfort I have right now. I am going down to face his children and I am sure the wave of this will hit me.

Do you have a story of a friend or family member who was killed by COVID “standard protocols” with other effective treatments being withheld?

If so, please share in the comments so we can get the word out to as many people as possible.

One Response to “Standard COVID Protocol Treatments Still Killing Patients in Hospitals – When will the Murders Stop?”