PROJECT
TAKE BACK THE REPUBLIC
Commences 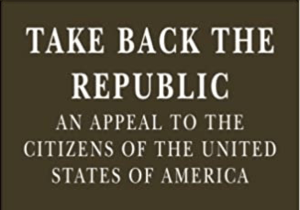 Book cover from: Take Back the Republic: An Appeal to the Citizens of the United States of America

With the advent of the COVID-19 Super Vaccination Agenda, it has become apparent to every rational and righteous U.S. citizen that the nation has been completely taken over by an incorrigible cabal of criminally insane psychopaths.

Given this indisputable reality, there is only one way to right the ship of state: We the People must act decisively — POST-HASTE — to take back the American Republic.

It ought to be evident by now that only the U.S. Citizenry can forever terminate the genocidal OPERATION COVID-19.

There are no leaders anywhere in sight who are capable of, or courageous enough, to shut down the Covid juggernaut rolling across the 50 states.  This stark reality must be faced head-on if the Republic is to be saved.

In view of this swiftly unfolding predicament, PROJECT TAKE BACK THE REPUBLIC (PTBTR) has been inaugurated.

PROJECT TAKE BACK THE REPUBLIC

The foundational principles of this national movement are firm and uncompromising.

They include a peaceful and nonviolent, lawful and constitutional approach to holding accountable the countless criminals who have colluded to commit the Covid genocide of the American people.

The philosophical and legal basis of PROJECT TAKE BACK THE REPUBLIC has it roots in two primary institutions long upheld within the Anglo-American traditions of jurisprudence and law enforcement.

The first is the crucial role and law enforcement authority of the county sheriff; the second is the irrefutable constitutional power invested in the citizens’ grand jury.

For the uninitiated, citizens’ grand juries were the original form that legally operated during the earliest years of the grand jury system.  The most fundamental right of any citizenry is to hold accountable tyrants by way of indictments issued by a citizens’ grand jury.

Particularly in cases where the existing criminal justice system has devolved into a full-blown protection racket for the rich and powerful is it a legal necessity to convene citizen’s grand juries to indict the guilty.

When the guilty parties are so dangerous to American people as they are throughout the ongoing Covid crime spree, it becomes an obligation to carry out citizen’s arrests after the proper indictments are issued by the lawfully convened grand juries.

Trials can then be conducted with sentences handed down accordingly to remove every Covid menace to society from the streets with all deliberate speed.  For example:

Dr. Fauci to be Indicted by the Citizens’ Grand Jury (Video)

The guilty Covid criminals are now aware that there is a serious endeavor that will soon unite the Patriot sheriffs in all 50 states with a constitutionally backed Citizen’s Grand Jury Movement.  These citizen Patriots will be lawfully empowered to carry out Citizen’s Arrests, convene Citizens’ Grand Juries, conduct Citizen-Conducted Trials, as well as execute the harsh sentences that will be handed down. See: HANG THEM ALL! LIVE—ON THE INTERNET!

The inevitable partnership that is now forming between the red county Sheriffs and citizen Patriots is the real linchpin in this class war between the 99% and 1%, also between the globalists and the nationalists.

The Founding Founders of the American Republic quite deliberately conferred citizen powers upon the American people in anticipation of this very moment of overwhelming governmental tyranny.

Not only that, but the Founders spoke of the necessity of invoking those powers to prevent a despotic government from oppressing the U.S citizenry just as the British Crown terrorized the American colonists.

As for the statutory law enforcement powers and constitutional authority possessed by the county sheriffs, they would be guilty of “misprision of felony” were they not to act en masse toward the immediate arrest and jailing of every guilty Covid criminal operating within their respective jurisdictions.

Hence, these two groups of Patriots — the righteous citizens and the law-abiding sheriffs — form a quite natural alliance in this intensifying war against the numerous and desperate Covid criminals.

Lest any Patriot fail to understand the true state of the American battlefield, one need only take a close look at the final outcome of the 2016 POTUS election map as follows: 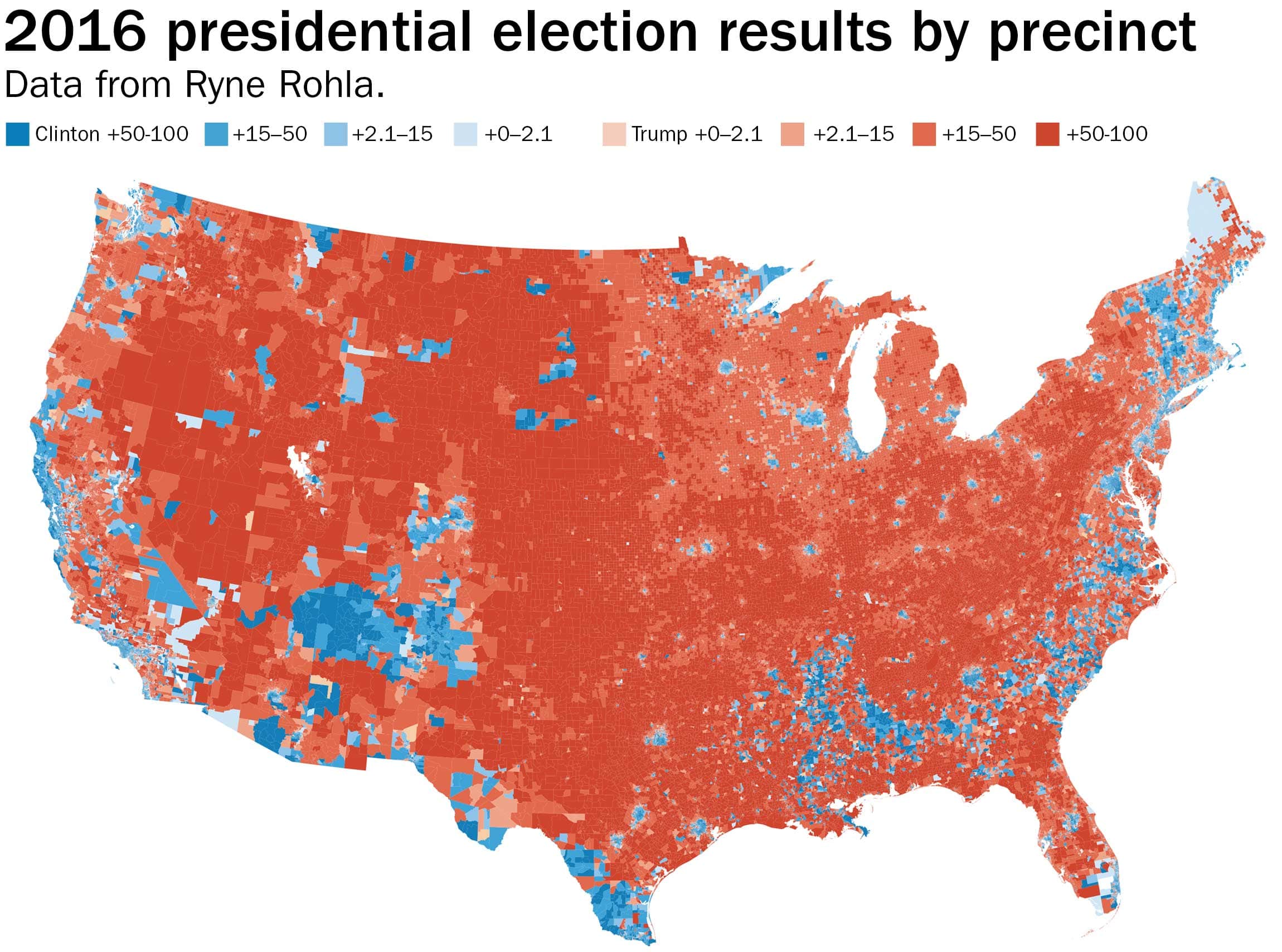 It’s important to understand that the 82 million vote President Donald Trump received during the 2020 POTUS election cycle translates to an even redder electoral map.

Clearly, the USA is dominated by red counties and sheriff Patriots. The relatively small blue islands, then, reflect the liberal strongholds which are surrounded by conservative and Christian counties.

Which means that the mostly conservative gun and ammo owners can easily control the whole nation after the arrests are made, trials are concluded and sentences carries out.

The cowardice on the Left is so rife and visceral that they will fold with the first public hangings.  The forces on the Right will then be able to re-establish the government of the United States of America as outlined in the Founding Documents, one red county at a time until the blue counties are cut off from their various lifelines.

KEY POINT: This nationwide citizen’s initiative will grow teeth by the day as county sheriffs in the red states sign on to PROJECT TAKE BACK THE REPUBLIC.  The Patriot sheriffs who have been elected in the conservative counties can lawfully deputize citizen undersheriffs who can then form the posses necessary to legitimately make the citizen’s arrests, after the citizens’ grand juries have issued their indictments.
(Source: RED ALERT: The Anti-Vax & Covid Truth Movements Will Soon Be Vilified After Being Blamed for Staged False Flag Domestic Terrorism)

The hard truth is that there’s only one way to shut down the genocidal Covid Super Vaccination Agenda.

We the People must act now.  For the more that the communist Democrats and POTUS imposter are permitted to consolidate their power at the federal and state levels, and advance their influence at the county and municipal levels, the more difficult it will be to terminate OPERATION COVID-19.

In view of this “historic partnership”, every concerned Patriot can begin informing and educating like-minded citizens.  Folks can get together and discuss what role each wants to play in this rapidly evolving “TAKE BACK THE REPUBLIC” project.  For example, military vets and ex-police officers can form posses to make the arrests of mayors, school board presidents, city council members, county commissioners who are committing Covid crimes locally.  Likewise, former city attorneys, judges, prosecutors, public defenders and other lawyers familiar with the criminal and civil justice systems can conduct and/or professionally participate in the coming trials.  Of course, any U.S. citizen can convene a citizens’ grand jury after evidence of a Covid crime has been confirmed and presented to the local body of deputized citizen authorities.

SOTN highly recommends that every Patriot begin opening up the necessary channels of communication with every sheriff who leans right.  Each sheriff must be made aware that, by standing idle during the commission of so many deadly and injurious Covid crimes, they are essentially guilty of “Misprision of felony’.  Bioterrorism, Medical Homicide, Genocide and Crimes Against Humanity are all felonies.  Elected representatives and government officials at all levels of government throughout the 50 states are now guilty, to varying degrees, of these extremely serious crimes committed against the American people.  Surely, these historically righteous law enforcement officers — the patriotic sheriffs — want to be on the right side of history. 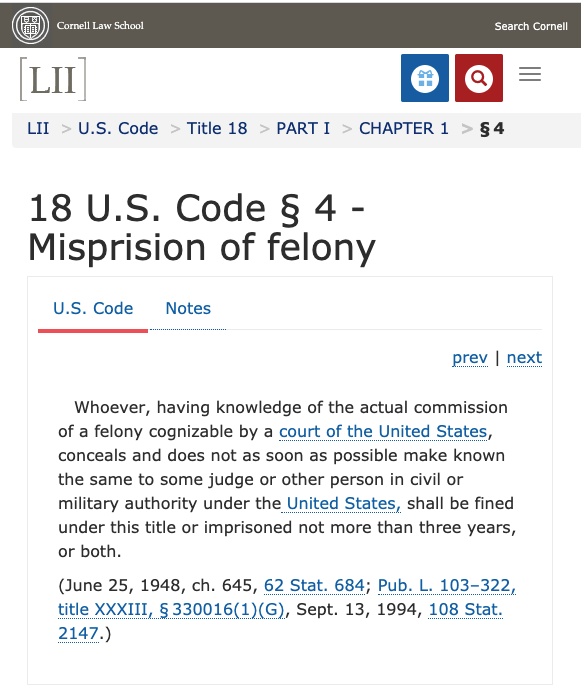 Maryland Sheriffs Says It Will Be CIVIL WAR Before Gun Confiscation