Fishing News from August 5th 2021 reports that a massive increase in wind farms is going ahead in Scotland which are concerning the fishing industry, particularly as fishermen are being frozen out of the planning process.  Mike Park, CE of the SWFPA said,’Over the last few years…we are being consulted at the very end of the process rather than at the beginning.’

A huge increase is on the way. 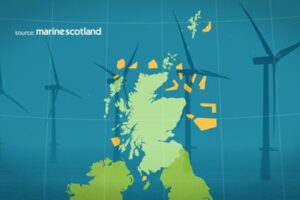 Six gigawatts are being currently installed in the North Sea, and an area is currently being auctioned to permit 10 more gigawatts, taking the total to around 17 gigawatts (A third of the UK’s total electricity requirement).

Yet more farms are in the pipeline.  See the map for all possible locations.  It’s massive.

Scotwind will instal several floating wind arrays, being pioneered in Hywind, the world’s first floating wind farm off Aberdeenshire,  These are anchored to the seabed, and make it possible to put turbines into much deeper water, or where piles cannot be installed.

In one project, only 11 of these towers are needed to produce 88 Mwh.

Thirty years ago the towers being erected on land typically required 5000 towers to produce a gigawatt (225 Kwh standard).  Now you need only 125!!!!

The total installed nuclear capacity in the United Kingdom is about 9 GW, the same as 1100 floating wind towers producing 8 Mwh each.

Just 6000 of these towers plus suitable battery capacity from hydrogen (electrolising – i.e. splitting water and storing hydrogen until power is required then converting it back to electricity through a fuel cell) could supply the UK’s whole electrical requirements, allowing for peaks and troughs in wind output, and in demand.

If all cars, buses and trucks etc are converted to run on hydrogen fuel cell after 2030,  the potential would be for around 20,000 of these towers to remove all other energy imports and fossil fuel requirement.

How vulnerable would we be to an aggressor who could drop missiles onto a few hundred towers and close the country down?  Wind turbine blades could be disabled with much cheaper weaponry – machine gun or rocket fire.  A surprise attack from the air and we could be literally powerless in a matter of hours.

There needs to be a good mix of supply and spare capacity as regards energy.  We should have plenty of eggs in different baskets.

You can understand how the massive increase in wind power must be making Prince Charles salivate, what with him owning all the rights to the sea bed in coastal areas.

But what about the impact on fishing?

The planned wind farms and those proposed longer term over the next 20 to 40 years, however exciting to the environmentalists and the corporations, constitute a serious threat to the Scottish fishing fleet, closing off huge areas to fishing.

Mike Park believes the least productive fishing areas should be used for wind farms, not the best.  Yet the fishermen are not being consulted.  ‘We need to be in there at the earliest stage possible.’

The same concerns are also being expressed in Holland, where Dutch fishermen’s group EMK is organising protests.  EMK says that current EU policies are making the future of fishermen ‘increasingly uncertain and making working at sea almost impossible.  The arrival of thousands of offshore wind turbines will close fishing waters.’  They also wish to be consulted before plans are given the go ahead.

TAP – Anyone would think Prince Charles and the Great Reset cabal wanted to cut people off from eating fish.  Well actually, they do.  They state the people should eat reconstituted plant/vegetable material made to resemble meat and fish.  The owner of the Crown Estates stands to make billions from the wind farm industry.  No doubt he and his fellow Great Resetters like Gates will be fully invested in the fake fish industry as well.  Page 67 of Deus Vult – The Great Reset Resistance being sold by the English Democrats for £25 a copy outlines the new food plan for the world with protein to be made available to humanity entirely from plants.  In February 2021, Gates said,’I don’t think the poorest 80 countries will be eating synthetic meat.  I do think all the rich countries should move to 100% synthetic beef.’   Fish won’t be far behind.  Yet more billions for landowners and controllers of the food industry, while independent operators like farmers and fishermen are sent to the wall unable to sell their meat or fish, or even catch it any more..  Gates is now the biggest landowner in the USA readying his highly toxic real food replacements.