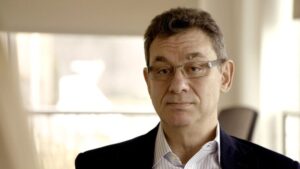 On December 28, 2019, just as news of the Wuhan plague sank its teeth into American society, Pfizer CEO Albert Bourla confronted then-FDA director Stephen Hahn with what he described as an intractable dilemma: Bourla lamented Pfizer’s “revenue loss,” a curious choice of words to describe a pharmaceutical manufacturer that netted $16.7 billion in 2019, the CEO of which earned $17mn in 2019 and $22mn in 2020–after the company’s Covid-19 vaccine hit the shelves. Those figures exclude the tens of millions of dollars Bourla gets from benefits, per diems and stock options, assets which, if added to his yearly salary, place him among the highest paid CEOs in the world.

Hahn, Bourla, and a gaggle of FDA and Pfizer officials held private talks to discuss Pfizer’s self-perceived financial woes. The meeting did not take place at Pfizer’s corporate headquarters in Manhattan. Nor did the conference happen at the FDA’s mammoth complex in Silver Springs, Maryland. This was unusual because official talks between the FDA and big pharma typically occur at one of those two locations, not a boardroom suite at the Hay-Adams Hotel in Washington, D.C.

Bourla had requested a clandestine gathering, having told Hahn that trade secrets would be analyzed and that Pfizer’s codified agreement with the FDA stipulated that Pfizer had authority to request covert discussions to prevent public dissemination of confidential information.  The FDA’s acceptance of those terms shows that it and big pharma share a matrimonial bedchamber.

At the meeting, Bourla divulged no trade secrets; rather, he bitched about how Pfizer had over the last decade missed out on “potentially billions of dollars” as many of its lucrative drugs lost patent protection and became available generically.

For reference: Per FDA statutes, a medication patent lasts 20 years from the date on which the application for the patent was filed in the United States, after which other pharmaceutical manufacturers may market the product using the name of its chemical ingredient. The painkiller Vicodin, for example, was patented by Abbott Laboratories in 1978; in 1999, the FDA granted manufacturers Mallinckrodt and Qualitest licenses to market the product, with a slice of the profits returned to the original patent holder—Abbott Laboratories. Despite the kickbacks, most big pharma file for patent extensions, which are often given. Today, more than 46 companies worldwide manufacture Vicodin under various labels, most notably hydrocodone/APAP. Patent protections apply even to vaccinations, although the FDA has power to lift patent restraints in times of national crisis or if the pharmacological mechanisms between two vaccines differ but produce a similar immunological response.

Bourla said he understood that Hahn was powerless to revise “unfair” patent protection programs, but he proposed a deal that would prove profitable for both Pfizer and the FDA.

He claimed to have “come into possession” of the Genome sequence for a highly transmissible respiratory infection that was ravaging Wuhan China and would undoubtedly infect America. In describing the virus, Bourla said, “It appears to be no more lethal than seasonal influenza. It seems to be airborne and spreads rapidly among infected populations. The symptoms may appear perilous, but based on our analysis, the average person has a 99.6% chance of full recovery.”

Bourla put forward an agenda: If the FDA approved Pfizer’s vaccine, which was already in the works, Pfizer would kick back 15% of profit over the next 36 months. “You can use that money to disperse research grants or for whatever you want,” Bourla told Hahn. “Truth be told, we probably don’t need a vaccine for this, but it’s important that you impress upon your peers, the CDC and people like Anthony Fauci, that a vaccine is necessary to ensure survival of the American people. The Trump administration must be made to believe this. The quicker we get this rolling, the faster we can distribute the vaccine, and people will feel safe.”

Bourla proposed a five-year vaccination plan, to include booster shots, to maximize profit. If society began to feel safe, a variation of the virus could be invented to frighten naïve people into demanding reformulated vaccinations, Bourla said.

In response, Hahn made a startling confession: one of Pfizer’s competitors had already pitched a similar plan to the FDA. Without naming the competitor, Hahn said emergency use authorization would have to be shared among “reputable” vaccine manufacturers, that “there would be a big enough slice of pie for everyone to enjoy.”

“Factoring in global distribution earnings, I’d agree we all stand to profit. You can trickle out emergency use authorizations, but it’s important to us that we obtain full approval first, leaving it up to you and your people to determine when that happens,” Bourla said. “And we’ll make sure that we provide greater incentives than any competitors.”

And the rest is history.

The information in this article came from a former Pfizer executive.

Pfizer, the FDA, and Bribes Aplenty