Government is the ultimate confidence game. It’s power rests on the idea that enforcing issued edicts through public pressure and policing is unchallengeable…

That power, however, is anything but that. Policing is a bluff, and a dangerous one at that. That bluff is maintained through rational risk assessment we all do when deciding whether to challenge the policeman’s demands.

This tension lies at the heart of all government systems, no matter how repressive or constructive. Those in power, ultimately remain there only with the consent of the governed. And once confidence in the constructive aspects of government (whatever they may be) fails, that’s when chaos ascends.

Charles Lipson, writing in Real Clear Politics, finally categorized the extent to which we as Americans have lost confidence in our institutions. Frankly, he’s a little late, but hey, I never turn my nose up to anyone willing to join this party.

The problem we face, beyond the specifics about crime, COVID, duplicity, and social division, is a palpable breakdown in public order at the same time the public has lost confidence in our government officials and the institutions they lead. The two meta-problems—the breakdown of order and erosion of public confidence—are deeply intertwined because we count on our leaders and institutions to give us reliable information, provide a stable environment (so each of us can go about our lives), and abide by the same rules we all do. Those are foundational elements of a peaceful, liberal, democratic society. Their attrition imperils that society and its governance.

Lipson’s right. And that he’s being published in a regime-friendly site like RCP is a tell that there is real worry at the top of the dominance hierarchy. Long-time readers know that chronicling this decline of confidence is kinda this blog’s raison d’etre so it’s good to see these ideas filtering out into ‘the real world.’

The 4 Stages of Griefing

But it’s also a tell that because we can now talk about this with our outside voices it justifies steps being taken right now to close the loop, lock the doors and push their control over us to its crisis point.

That justification however, is a flimsy one, only made by those so suffused with self-righteousness that they refuse to entertain anyone’s non-compliance. I came across a tweet that succinctly expressed the current state of affairs as it pertains to COVID-19 and the Delta bogeyman. 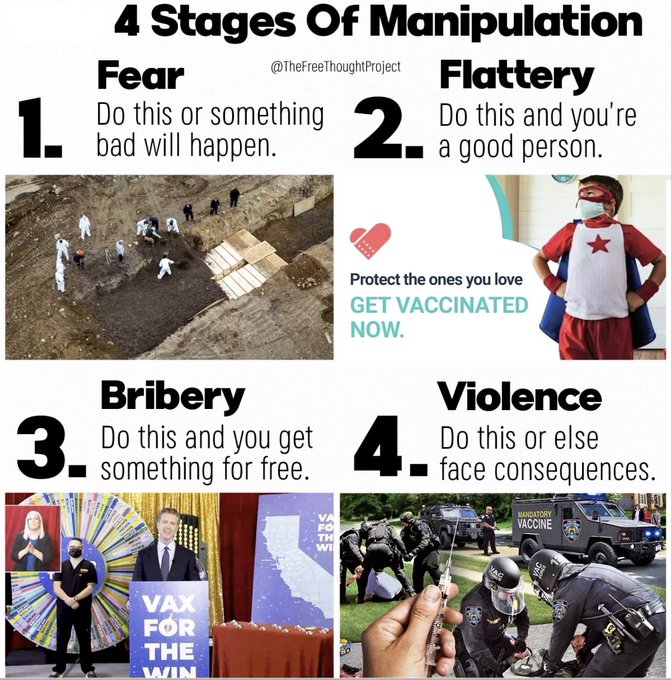 Last week I told you that we’d entered the eye of Davos’ Storm. We are accelerating towards a future that when viewed from the outside looks like Terry Gilliam’s Brazil but feels from the insides like Steven Spielberg’s interpretation of Philip K. Dick’s Minority Report.

Davos and their agents have reached Stage 4.

And Stage 4 can last longer than a lot of people are uncomfortable with.

Things would have never gotten to Stage 4 if our leaders had been honest brokers.

Things would have never gotten to Stage 4 is they weren’t engaged in the biggest psy-op in human history.

Things wouldn’t have gotten to Stage 4 if they were actually doing the jobs we gave them and respected the relationship between government and governed.

Today going to Stage 4 is inviting chaos when they should be restoring order. The problem for The Davos Crowd is they have always benefitted from inviting a little chaos in the past.

Because, in the past, the consensual hallucination of government was still there. We still believed, wrongly, that they had our best interests at heart. So, any chaos inserted in the Matrix could be used as an opportunity to advance their schemes, because the critical mass of skepticism wasn’t there.

But, that’s not the case now. Inviting chaos when they’ve taken everything from us and exposed their rapaciousness is inviting something they’ve never seen before.

While the U.S. hasn’t hit rock bottom yet, we’re not seeing the real uprising. In France, Italy and now Poland, those that have nothing left to lose have lost it (H/T to Gerald Celente). Does anyone want to see what happens when another 6 million Americans are thrown out of their homes by Blackrock?

No wonder Biden was desperate to get the eviction moratorium extended no matter how unconstitutional.

But when you mix this level of social and financial repression with the complete lack of confidence in (and by) the institutions, as Lipson pointed out, you get something very volatile indeed. This is why Italians were burning their vaccination cards this weekend.

This is why French firefighters and public health officials are striking against President Macron’s mandates. And it’s why no matter how much our media, the government and the COVID Karens in the ‘burbs threaten us the more likely when someone stands up and just says, “No,” the whole thing comes crashing down.

Because of this instability, this fragility, it is incumbent on us right now to say “No,” everywhere. Threats of job loss over vaccination? No, force them to fire you. The lawyers will be standing 20 deep to take your case to court.

In Moscow the restaurants lost 80% of their business overnight after the city instituted a vaccine passport to eat out. The response? Russians just said, “No,” and cooked. This is your model.

All during the ‘pandemic’ in my home town I avoided places that mandated a mask and ignored the warnings on those places that tried to browbeat me into wearing one.

I walked in, was polite, did my business and left.

I wore masks out of politeness to locals outside of my hometown. But, that’s it.

Today, we are being coerced to accept second-class citizenship for not getting vaccinated where the vaccines do nothing to stop the spread of the virus. This is being framed as irresponsibility when, if anything, the vaccinated carry higher viral loads making them potential super-spreaders endangering everyone else.

I don’t need to get an experimental gene therapy to validate your life choices.

I need you to see that there is more to life than following the mandates of psychopaths and pathological liars to err on the side of caution.

No wonder there’s an increasing cohort of people moving into Stage 5, just saying ‘No.’ The time for virtue-signaling is over. The time for lying about masks, death statistics and the basics of virology is over. This is a political operation and we need to treat it as such.

If you got the jab, fine. If you didn’t have a side-effect, great!

If you got COVID afterwards, had mild symptoms and recovered, even better. I’m glad you survived.

But, it stops there. Don’t worry about me. Now it’s your responsibility to understand what the true stakes are and find a future that doesn’t end in derangement, a permanent underclass and mass death.

So, let’s stop pretending that any of this now is about public health, and hasn’t been for more than a year. If anything it has always been about your personal health and therefore getting a vaccine should be a personal choice.

Anything beyond that is pure politics serving the interests of those who have been caught red-handed lying about every bit of this and profiting from our shared misery egregiously.

It is about the failure of the state to make good on its basic promises for decades and coming to terms with that honestly. Now the State’s lies about COVID and the vaccines are distractions from their failures, dividing us to not only maintain that power but expand it exponentially.

Our confidence in them is gone. That much is crystal clear. What isn’t obvious to many is that their confidence in our willingness to go along with them is also gone. That’s why they are so swiftly moving into Stage 4.

Because that is the far scarier state of play for them.

The more we simply go to Stage 5 and say, “No,” the quicker this entire operation collapses and we can get on with Stage 6, fixing what was broken.