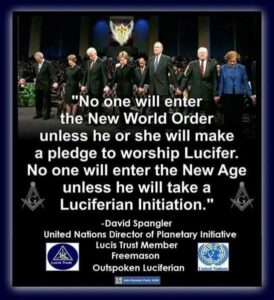 It sounds far-fetched to say that humanity has been inducted into Cabalism, a satanic cult,

but this literally is what has happened.
Satanic cults control and exploit their members by making them sick, physically and morally.

“We corrupt in order to control.” – Giuseppe Mazzini, who became head of Illuminati in 1834 on death of Weishaupt.

This is the hidden agenda behind the scamdemic, lockdowns, vaccinations and passports.
This is why they won’t end unless people defy covid rules en mass.
Benjamin Creme, a Jew and another prominent New Age “prophet,”  insists that those who refuse to join in this World Initiation will find themselves in the minority and will have to “withdraw from this life.”   Is this beginning to sound familiar?
Related – Vaccine Signals Acceptance into Satanic Cult
The UN’s Luciferian Connection
from May 20

by Jim Duke
(henrymakow.com)
Many applaud the United Nations for its public policy and efforts of humanitarian society…
However, the U.N. is a front for Luciferian agendas. This is seen by underlining Luciferian themes and esoteric teachings WITHIN the halls of the U.N. There is even an occult meditation room hosted at the U.N.
People do not realize the influence Theosophists have had on the United Nations.
Theosophy, founded in the late 1800s by a Satanist Luciferian occultist named Helena Blavatsky. A group spawned from it under Alice Bailey called “Lucis Trust.”
Lucis Trust, originally founded under the name “Lucifer Publishing” before changing its name, publishes esoteric occult works and promotes its 24 esoteric writings under its main education centers, the Arcane Schools and Findhorn Foundation. 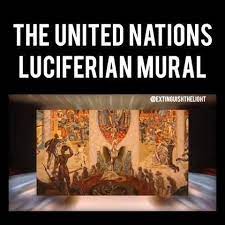 Many prominent U.N. directors were Luciferians, such as Robert Muller and Maurice Strong, who initiated Agenda 21. They were practitioners of Theosophy, occult Luciferians, and drafted policies to initiate New Age through U.N. policies and directions, as the United Nations was developed to do. If you haven’t, see my page on the UN 2020 summit explaining it in more detail.
David Spangler, Director of Planetary Initiative at the United Nations (department has since been removed from rosters), has said, “Lucifer comes to give us the final Luciferic initiation…that many people now and in the days ahead, will be facing – for it is an initiation into the New Age… No one will enter the New World Order unless he or she will make a pledge to worship Lucifer. No one will enter the New Age unless he will take a Luciferian initiation.”
Benjamin Creme, a Jew, and another prominent New Age “prophet,”  (Matrieya’s Mission, p.128)  insists that those who refuse to join in this World Initiation will find themselves in the minority and will have to “withdraw from this life.”
Creme exhorts his followers to, “Be not afraid, therefore, when the ‘men of cloth’ raise their voices against the Great Lord, naming Him anti-Christ and arch-deceiver, for they know little of the laws which underlie their faiths and act and speak from ignorance and fear.”
Luciferians defend Lucifer as the Great God, the giver of life.
As the Light-Bearer he enlightens men and provides knowledge. But in their view, Adonay (God) and Jesus Christ are the imposters to hold that light from us. And they will summon the great ancestors known as the “Ascended Masters” to open the door to the stage of the New Age in the “Age of Aquarius.”
… In the meantime, consider what the U.N. actually supports and watch the pieces move towards that agenda. It represents Luciferians putting Lucifer on the throne for One World Government.
Thanks to Steven Fishman for sending this.
Related –  Must-see video by Dr. Mike Yeardon explaining our predicament and the danger we face.
——-We’re Satanically Possessed by Cabalists
https://www.henrymakow.com/2021/08/un-lucifer-connection.html?_ga=2.255445896.1423902940.1626993185-1085179846.1620503215