This evening I received an email (shared below) from Davey Alba at the New York Times. Davey explained that “researchers” from two organizations with direct connections to and funding from Facebook were defaming both myself personally and Gab as a whole for spreading “misinformation.”

I’ll get into the baseless and defamatory claims, but first I’d like you to tell you a little more about these two organizations.

Stanford Internet Observatory is led by Alex Stamos who is the former Chief Security Officer for Facebook. The CTO of Stanford Internet Observatory, David Thiel, also worked at Facebook before starting at SIO. Stanford itself is of course widely known as the Ivy League snob school that the “best and brightest” in Silicon Valley all attended and have deep connections to.

The second organization is Graphika. Graphika is a Facebook-funded “research” group whose executive leadership team includes Camille Francois, a woman worked at Google’s infamous censorship technology incubator “Jigsaw,” and Lauren Pencek who previously worked for the National Security Agency (NSA) among others.

The New York Times own reporting confirms that Graphika receives its funding from Facebook and Facebook is also listed as one of Graphika’s top clients right on the front page of their website. Aside from Facebook, Graphika also partners with DARPA, a research and development agency of the United States Department of Defense, along with Google, TikTok, and Pinterest.

Gab will never work with organizations like these and will never subject our community members to the slimy eyeballs of people who wish to “research” them. In fact we have spent years and a considerable amount of our engineering resources to stop these type of “reeeesearchers” from treating our community like lab rats.

Perhaps that’s another reason why Graphika has spent almost an entire year attacking Gab, but I suspect it has more to do with their deep connections to our competitors.

Let’s dive into the email from the New York Times, shall we?

I’m a reporter from The New York Times, where we are writing about some viral posts about the coronavirus that have gained traction online in the past few weeks. I wanted to get your comment on a post by you that the Virality Project — a consortium of research groups focused on misinformation, including the Stanford Internet Observatory and Graphika, among others — identified as misinformation.

I’ve also screenshotted the relevant portion in the document:

Would you have a response to this being labeled as misinformation by this group of researchers?

Feel free to call me at XXX-XXX-XXX if you have any questions about our story.

My response to Davey is as follows:

The news that Lloyd Austin intends to make vaccinations mandatory in the military is two days old: https://www.foxnews.com/politics/sec-of-defense-austin-to-announce-mandatory-vaccine-policy-for-all-active-duty-military

I’m telling the truth. Your Facebook-funded “fact checkers” like Graphika are wrong and are the people peddling disinformation here. My response to them is that they can get bent. I’m reminding tens of millions of people that they have religious liberty and God-given human rights in this country. Deal with it. Jesus is King.

I spent all week posting the many dozens of direct messages that I have been receiving on Gab from Military service members and their families who shared their personal stories and experiences with me. I also posted similar stories from those working in healthcare and other various industries.

People are scared, but not of Covid. They are scared of being forced to choose between violating their religious beliefs and giving up control of their own bodily autonomy or losing their livelihood. It’s a position that no human being, let alone a citizen of the United States of America, should have to be in. I choose to share their stories because no one else is.

I then drafted a blog post about my experience reading and sharing these heartbreaking stories and reminded millions of people that in the United States of America we have God-given human rights, including religious liberty. I did this by providing a set of religious exemption templates for Christians to use in the Military and in their workplace.

The post went wildly viral on Gab, Facebook, and Twitter. I also emailed it to millions of people, because people deserve to know that they always have options and the dignity of bodily autonomy and religious liberty.

For doing this both Gab and myself are being defamed for spreading “misinformation,” a totally subjective and ambiguous term that can mean anything the tyrants in power want it to mean.

Ultimately what we are seeing here is an anti-Christian, anti-competitive attack on Gab by organizations who partner with, are funded by, and are staffed by people who worked for our direct competitors.

I am sharing this all with you now to let you know how these wicked people operate and to shine a light on their lies, deception, and anti-Christian attacks. They aren’t just attacking me, they are attacking any and all dissent and opposition to their libido dominandi (lust for power.)

I’m also beating the New York Times to print by emailing this information to millions of people over the weekend. This is how you beat these people at their own game. The time to stand up and speak the truth boldly is now.

God bless you and thank you for reading.

Help Us Fight Back Against These Attacks

We need your help now more than ever. Gab is 100% funded by people like you and has been for almost five years now. As our community continues to grow, our operational costs grow with it. We rely on The People to pay for our data centers, engineers, lawyers, accountants, customer service team, and more. If you got any value from Gab this year please consider upgrading to GabPRO for just $15 a month or making a one-time purchase/donation from our shop. 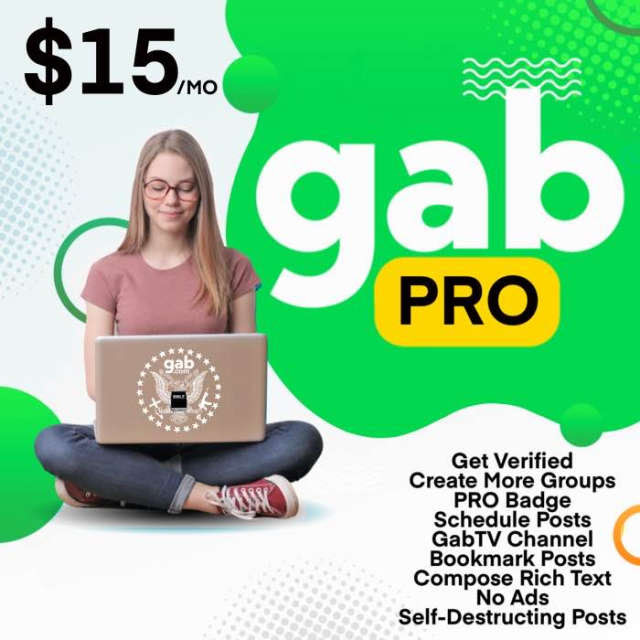 This message was sent to Henry Curteis at hmtcurteis@gmail.com because you elected to receive these emails when you created your Gab.com account.

We take your privacy and your liberty very seriously and will keep your information in the strictest confidence. Your name will not be sold to or shared with third parties. We will email you from time to time with relevant news and updates, but you can stop receiving information from us at any time by following very simple instructions that will be included at the bottom of any correspondence you should receive from us.