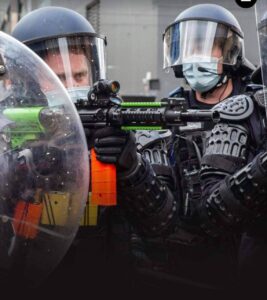 Australians turned out in mass Saturday to protest tyrannical police harassment in a country that is reported to now be more authoritarian than even China.

In Victoria, video footage shows police firing on unarmed crowds, allegedly with rubber bullets. Other substances were sprayed on the crowd such as pepper spray, and one video clip showed a young boy blinded and crying.

This was all after a week that saw horrific video footage online throughout Australia of police beating up 12-year-olds for not wearing masks, a child being ripped from a parent’s arms allegedly to inject her, and police just in general terrorizing the public for whatever reason they saw fit, using “COVID” as an excuse for everything.

Here is my video report. This is from our Bitchute channel, and it should be on our Rumble channel shortly.