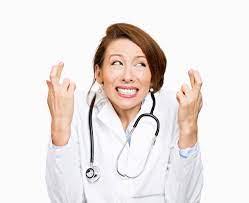 When you go to the doctor for help and treatment you probably assume that once he has decided what is wrong with you, he will automatically give you a treatment that is quite specific for your disease.

Nothing could be further from the truth.

With a very few exceptions there are no certainties in medicine. What you will get will depend more on chance and your doctor’s personal prejudices than on science.

This problem isn’t a new one, of course.

In the preface to The Doctor’s Dilemma playwright George Bernard Shaw pointed out that during the first great epidemic of influenza which developed towards the end of the nineteenth century, a London evening newspaper sent a journalist posing as a patient to all the great consultants of the day.

The newspaper then published details of the advice and prescriptions offered by the consultants.

The whole proceeding was, almost inevitably, passionately denounced by the medical journals as an unforgivable breach of confidence, but the result was nevertheless fascinating: despite the fact that the journalist had complained of exactly the same symptoms to all the physicians, the advice and the prescriptions that were offered were all different.

Even in these days of apparently high technology medicine, there are many — almost endless — variations in the treatments preferred by different doctors.

Doctors offer different prescriptions for exactly the same symptoms, they keep patients in hospital for vastly different lengths of time, and they perform different operations on patients with apparently identical problems.

There are, it seems, no certainties in medicine.

As one doctor put it rather concisely your treatment (and possibly your future) depends entirely on which way you turn at the end of the hospital corridor. Go left and you will end up having a six hour operation. Go right and you’ll go home with a prescription for pills.

There is, indeed, ample evidence now available to show that the type of treatment a patient gets when he visits a doctor will depend not so much on the symptoms he describes but on the doctor he consults.

So, for example, consider what happened when 430 family doctors were asked to explain how they would treat a 35-year-old accountant complaining of backache brought on by digging in his garden.

The ‘case history’ was deliberately made fairly precise.

However, despite this precision, the recommended treatments varied enormously.

Around ten per cent of the doctors said that there was a good chance that they would refer the patient to an osteopath but the other ninety per cent said that they hardly ever, or never, referred patients to osteopaths.

A third survey of over 400 doctors showed that some doctors never provide their patients with any contraceptive advice at all.

Despite all these variations in the type of treatment offered, most doctors in practice seem to be convinced that their treatment methods are beyond question.

Many general practitioners and hospital doctors announce their decisions as though they are carved on stone.

But on the basis of the evidence, it seems that most decisions about how patients should be treated are based on nothing more scientific than guesswork, personal experience, intuition and prejudice. And fashion.

4 Responses to “When Doctors Guess”