US Olympic swimmer Michael Andrew, a gold medal favorite, is standing firm in his decision to forgo receiving the COVID-19 vaccination.
Speaking with “Varney & Co.” on Fox Business Tuesday, Andrew explained, “Everything we take and put in our body is very calculated. You know, with the period going into Olympic trials, I didn’t want to risk any time out of the pool.”
With the 2021 Olympic Games taking place in Tokyo, Japan this year, Andrew sees himself as representing the freedoms Americans get to enjoy that other nations may not, such as the freedom of choice.
“Going to the games not only unvaccinated, but as an American, I’m representing my country in multiple ways and the freedoms we have to make a decision like that,” he said.
There is currently no mandate for Olympic athletes to be vaccinated against COVID.
Andrew also noted that he’s not against all vaccines, telling Varney, “We aren’t anti-vax. It’s not that we’re doing this intentionally. It’s an educated decision as educated as possible.”
The top American swimmer said, “The fact that the effectiveness of the vaccine is lower than the risk of me getting COVID, I just realized it wasn’t quite necessary and wasn’t smart in my part in terms of preparation going into the games.”
The Olympian did note that he has been getting nasty messages from pro-vaccine haters, saying, “But this is the first time I really received, I guess, like hate messages kind of things. It’s been pretty interesting. On my YouTube channel or Instagram, really anywhere it’s been pretty harsh.”
While there are some attacking him online, the Olympian’s family and friends support his decision, and those who are “on the same side” have backed him on the internet as well. 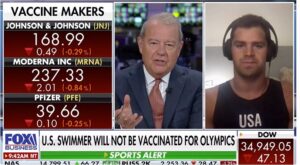 Less than half of Americans have been vaccinated – still, despite what you see in the media.  See below post from Dr Mercola.
https://tapnewswire.com/2021/07/vaccines-are-effective-for-six-months-make-targeted-pathogens-more-dangerous-and-accelerate-new-illnesses-great-business/