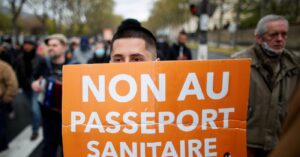 Quite why Macron’s handlers had him make this announcement the day before Bastille Day we will never know, especially considering the Macron regime’s year-long siege at the hands of the Gilets Jaunes movement only came to an end when the “pandemic” hit.

Nevertheless, that’s what he did…and the outcry was as vociferous as it was predictable.

Thousands of people took to the streets of cities all across the country. Fittingly, Bastille Day became a day of protests…which turned violent when the police fired tear gas into the crowds.

France is not the only country with active, visible and growing “vaccine” protests.

On Monday the Greek government announced they would be making Covid19 “vaccination” mandatory for some sectors, and since then large crowds have gathered opposing the move and calling for the Prime Minister to resign.

In the UK, Boris Johnson’s government has suggested that “Covid passes” might be necessary for service industries and events in the future, but major nightclub chains have already stated they would not enforce them.

Earlier this week the UK Parliament voted through a bill to force mandatory vaccination on care-home workers, but we should take note the vote was fairly close (319-246, with ~80 abstentions). If you compare this with the overwhelming support for previous coronavirus legislation, you can see (hopefully) some growing resistance.

There was even a hint of desperation surrounding the vote itself. MPs from both main parties criticised the lack of time devoted to the measure (they had only 90 minutes to read and discuss it before voting), the lack of research supporting it (no impact study was included) and the fact the vast majority of MPs were voting by proxy.

Whether the bill makes it through the House of Lords or not, the move is unlikely to do much to quell the huge (and growing) protest movement in the UK. Where crowds estimated upwards of a million people have swept through the capital city on a monthly basis. The protest planned for later this month will likely be the largest yet, and this new legislation will be mostly to blame.

The impact of some of this legislation can already be seen in various authoritarian pilot schemes around the world.

In Texas, a Houston hospital chain was the first major healthcare provider to force its staff to get the vaccine. More than 150 of them either retired in protest or were fired for non-compliance. Projected across a national health service, that could cause thousands upon thousands of people to lose their jobs and prove a major disaster.

In Israel, the controversial “Green Pass” program was abandoned after less than three months due to the vast majority of people simply ignoring it.

Does this demonstrate the way forward? What do you think?

Discuss in the comments below.

UPDATE: There are also large, ongoing anti-vaccine passport protests in Dublin the last few days, with more planned for this weekend.

If you’re aware of any other current or planned protests, please let us know and we’ll add them to our list.

The largest protests in France are planned for this Saturday. And for our UK readers, Unite for Freedom are planning more anti-lockdown and anti-vaccine passport protests over the summer, specifically Saturday the 24th of July and Saturday the 28th of August. Join the 100,000s of others to make your voices heard.

2 Responses to “UPDATED: Vaccine Passport Protests Around the World”